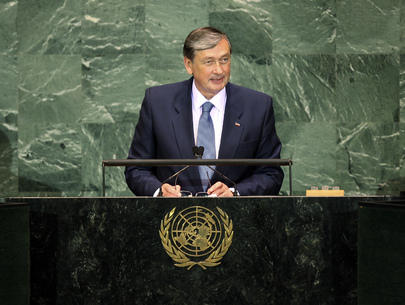 DANILO TÜRK, President of Slovenia, said the Assembly had worked these past few days to generate the necessary political will to “seal the deal” at the Copenhagen Climate Conference, and that humankind must make a resolute step towards a new and effective system to mitigate the effects of global warming.  Each Member State’s responsibilities were common, but differentiated.  Further, it was necessary to broaden that front to include civil society and the private sector, as a profound societal shift was needed to change “the way we produce, the way we consume, and the way we live”.

For that to happen, however, he said, the world needed a comprehensive strategy that consistently addressed such issues as the food crisis, climate change, the energy crisis and the spreading of infectious diseases.  Despite the different roots of those problems, they produced a cumulative effect, he said. Those issues hobbled global development and made the Millennium Development Goals, “only a distant possibility”.

In that context, the role of the United Nations was enshrined in the outcome of the United Nations Conference on the World Financial and Economic Crisis and Its Impact on Development, held in New York last June.  The results of that meeting should be elaborated further, and specific priority tasks for global development must soon be defined.  Much was expected of the upcoming Pittsburgh Summit of the G-20.  Moreover, resources must be increased and adjusted for the Bretton Woods institutions with a view to proper maintenance of global financial stability.

But much more was needed, he said, including the improvement of official development assistance (ODA), and particular priority to Africa’s development. Slovenia was among the first Member States to sign today the Optional Protocol to the International Covenant on Economic, Social and Cultural Rights.  Slovenia was also an active member of the Human Rights Council and remained optimistic, although problems existed that exceeded that Council’s potential.

“We still haven’t found the right tools to respond to [systematic human rights violations] in a timely and effective manner,” he said, welcoming the Assembly’s recent debate on the responsibility to protect.  He further said that reform of the United Nations Security Council was long overdue, and thus far, progress had been insufficient.  Indeed, proposals such as that made last year by Slovenia needed to be approached head on.

He said peacekeeping operations must also be strengthened by increasing operational capacity and political sophistication, as that would strengthen all other United Nations activities, including preventative diplomacy.  He said the United Nations remained an indispensable forum for political consultation and policy advice, and its experience was irreplaceable.  That was evident in the case of Afghanistan, especially, as after three decades there was still “no military solution to that country’s variety of problems”.

Although conflicts such as that were often discussed at specialized international conferences, he said, the time had come for a broad look at the entire experience to assess what had gone wrong, and why.  That would provide a sober assessment of the current situation, and a careful definition of further steps to make international political, economic and administrative assistance more effective.  Although the current agenda of the United Nations was heavy, that was “not news” as the Organization had always represented the hope and the promise of the world, he said, calling on the international community to live up to that promise.