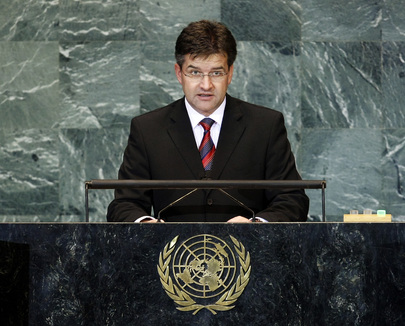 MIROSLAV LAJČÁK, Minister for Foreign Affairs of Slovakia, associating himself with the statement of the European Union, called for an ambitious, balanced and comprehensive agreement on climate change in Copenhagen in December and strengthened global strategies on food security.  It was also important not to lose sight of the Millennium Development Goals.  He appreciated the Eastern European Group of States’ endorsement of Slovakia’s candidature in the Economic and Social Council, as his country was committed to being an active member of that body.

Regarding peace and security, he said more emphasis should be placed on ensuring that United Nations peacekeepers and other United Nations actors were properly equipped and trained, including in the area of so-called critical capabilities.  For its part, Slovakia had participated in international crisis management operations under United Nations command in Afghanistan, Cyprus, Kosovo, Bosnia and Herzegovina and the Middle East.  It also had engaged in security-sector reform and, as Chair of the United Nations Group of Friends on that issue, would work to ensure that the Organization could react to the needs of Member States in an adequate and timely manner.

The United Nations had made progress in the areas of preventive diplomacy, conflict prevention and mediation, he said, citing its mediation of the crisis in Kenya, and Slovakia would further that work.  Such issues were broadly connected to human rights and civilian protection and, as a member of the Human Rights Council, Slovakia promoted respect for those issues, at the national and international levels.  The responsibility to protect concept had been an important achievement of the 2005 World Summit and deserved more attention, in order for people to be protected from genocide, war crimes, ethnic cleansing and crimes against humanity.  States also had a duty to prevent incitement of those most serious crimes.

Turning to Security Council reform, Slovakia supported enlarging the Council in both categories of membership to better reflect global realities, he said.  Attention should also be given to the Council’s working methods.  Particularly concerned at the risk of weapons of mass destruction falling into the hands of non-State actors, like terrorists, Slovakia would work with all partners towards a successful outcome of the 2010 Non-Proliferation Treaty Review Conference, and called for the early start to negotiations on the arms trade treaty.

He said Slovakia was gravely concerned at Iran’s continued defiance of international obligations, and called on that country to commit to diplomatic negotiations to restore trust.  His Government also strongly condemned the nuclear test carried out by the Democratic People’s Republic of Korea and called on it to revoke its position on the Non-Proliferation Treaty and to join the Comprehensive Nuclear-Test-Ban Treaty.

As for regional issues, he said Slovakia followed events in the Western Balkans and continued to promote full respect of international law, including the sovereignty and territorial integrity of States in their internationally recognized borders.  That principle guided Slovakia’s position on Georgia, and he was disappointed that the Security Council had not extended the mandate of the Observer Mission there.  In Cyprus, Slovakia would continue its engagement in the rapprochement between Greek and Turkish Cypriots, while in Afghanistan, it was helping to establish a secure, stable environment.  In closing, he called on States to work together to overcome the negative impacts of the financial and economic crisis and to intensify efforts to adopt measures at local, regional and global levels, in the spirit of solidarity.