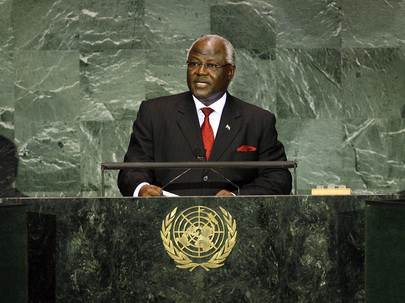 ERNEST BAI KOROMA, President of Sierra Leone, said global crises were best tackled through dialogue among civilizations.  Such dialogue promoted understanding, understanding promoted cooperation, and cooperation made vital and legitimate the institutions and mechanisms that had been created to meet common goals.  He added that broad and inclusive dialogue also created the synergies required to tackle modern challenges such as climate change, HIV/AIDS, tuberculosis and flu pandemics, the food and fuel crises, terrorism, nuclear proliferation, drug trafficking and the present global economic meltdown.

“Among some population groups, the impact of the [economic] crisis may be on the size of their bonuses; on others it may be on whether they acquire a second car or not,” he said, but stressed that for the vast number of people, particularly in Africa, the impact of the crisis created life-threatening situations.  He said that the global financial crisis had put Sierra Leone’s recent economic growth in jeopardy and pushed greater numbers of people towards extreme poverty.

Aside from such challenges, and despite years of conflict, political stability had improved rapidly in his country, and economic growth remained strong at 6 to 9 per cent.  He said the Government had already achieved results on key priorities, including health and education reform, as well as infrastructure construction.  He also highlighted the recent completion of a hydro-electric project, which was supplying clean, affordable power to Freetown.  On the downside, however, his country was still struggling to deal with the effects of trade imbalances in international commerce.

With regard to the challenges ahead, he said that climate change posed a particular threat to African nations.  “Today, the poorest nations, who contribute the least to the phenomenon, are the most vulnerable,” he said.  Another danger was the increasing proliferation of small arms and light weapons, he said, and called for the strengthening of conflict resolution mechanisms.

He went on to praise the United Nations peacebuilding efforts in his own country and announced that Sierra Leone, as “a payback and in the spirit of reciprocity”, had fully joined the ranks of countries contributing troops to United Nations peacekeeping operations.  In conclusion, he called for reform of the Security Council “without further delay”.  To that end, he reiterated Africa’s traditional demand for representation in both permanent and non-permanent categories in that body. “Let us promote multilateralism and strengthen our collaborative efforts to contain the rising threats to our planet,” he said.