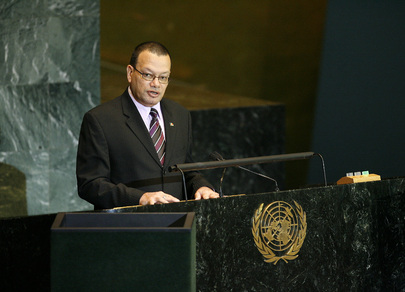 RONALD JUMEAU ( Seychelles) delivered his statement on behalf of President James Michel, and said that with a population of just over 85,000, the Seychelles was painfully aware of its vulnerability as a nation at the mercy of global tides.  This vulnerability was marked by economic and other crises and the increasingly destructive effects of climate change.  The country’s inherent vulnerabilities and economic imbalances meant it had to face the crises earlier than other countries.  Thus, it had arranged a standby deal with the IMF and was discussing debt re‑scheduling through the Paris Club.  This process marked a milestone in the relationship between multilateral financial institutions and a small island developing State.  It had proved that the instruments of the global economy could be adapted to meet the needs of a smaller partner.  It was an example of a responsibility shared.  “Through shared responsibility, a crisis can be contained,” he said.
Turning to the unrest in Somalia, he said the conflict had spread beyond its borders to piracy on the high seas.   Seychelles was directly affected, as pirates lay siege to the yachting, tourism and fishing industries of the western Indian Ocean.  The long-term impact was much wider, since as insurance costs increased for shipping, the costs of transporting essential goods also escalated.  While noting other States’ role in fighting piracy, he urged the international community to take additional actions, such as strengthening the rule of law in Somalia.  Other actions included expanded coordination and sharing of information among States in the region, and the use of sufficient military force in the region to deter the pirates.

Nowhere was shared responsibility more needed than in protecting and nurturing the planet’s shared environment, he said.  In small island developing States, preservation of the environment was about the economy and survival.  The international response had been inadequate so far, and there was no clear agreement weeks from Copenhagen.  The Alliance of Small Island States (AOSIS) would call for measures needed for its survival, including a peak in global green house gas emissions by 2015 and a subsequent decline, and a reduction in greenhouse gas emissions by more than 85 percent by 2050.

Seychelles lauded the United Nations for its contribution to advancing the world’s understanding of how climate change was damaging the planet.  The Intergovernmental Panel on Climate Change had shown that climate change was a disaster waiting to happen.  It was the international community’s duty and responsibility to prevent it.