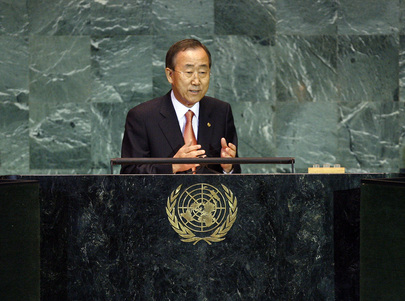 Opening the sixty-fourth session’s general debate, United Nations Secretary-General BAN KI-MOON recalled that the Assembly gathered every September in a solemn rite –- to reaffirm the United Nations’ founding charter and faith in the principles of peace, justice, human rights and equal opportunity for all.  Delegates assessed the state of the world and laid out a vision for the way forward.

This year, however, the Assembly had been asked to rise to an exceptional moment:  amid the many crises of food, energy, recession and pandemic flu, the world looked to the 192-member body for answers.

“If ever there were a time to act in a spirit of renewed multilateralism –- a moment to create a United Nations of genuine collective action –- it is now,” he said.  It was time to put the “united” back into the United Nations.

Laying out his vision, he asked world leaders to make this year one in which the Organization rose to the greatest challenge facing the human family:  the threat of catastrophic climate change.  Indeed, just yesterday, 100 Heads of State and Government recognized the need for a climate agreement that all nations could embrace, in line with their abilities, consistent with what science required, and grounded in “green growth” –- the lifeline of the twenty-first century.

He urged that this year see a world free of nuclear weapons.  It was a cause that had lain dormant for too long, which was why, last October, he had proposed a five-point plan for putting disarmament back on the global agenda.  The Russian Federation and the United States had pledged to cut nuclear arsenals and this May, there would be a chance to push for real progress at the United Nations Review Conference on the Nuclear Non-Proliferation Treaty (NPT).

Moreover, tomorrow’s historic Security Council Summit, chaired by the President of the United States, offered a fresh start.  “With action now, we can get the ratifications to bring the Comprehensive Nuclear-Test-Ban Treaty (CTBT) into force,” he said.

In the fight against poverty, he hoped this year would bring a focus on those left behind, as a new crisis was at hand.  The near-poor were becoming the new poor and an estimated 100 million people risked falling below the poverty line this year.

Markets might be bouncing back, but incomes and jobs were not, he said.  People believed the global economy was stacked against them, which was why he had put forward a Global Jobs Pact for balanced and sustainable growth, and was working to create a new Global Impact Vulnerability Alert System, which would provide real-time data on the world’s socio-economic picture.

A special summit on the Millennium Development Goals also would be convened at this time next year.  “With only five years to go, we must mount a final push towards 2015,” he stressed.  Rightly, women and children had been placed at the forefront.

The prevention of sexual violence against women also must be a priority.  “Let us agree:  these acts are an abomination,” he stressed.  Leaders of every nation were personally accountable when such crimes were committed within their borders.  When women died in childbirth or were raped as a weapon of war, the United Nations could not look the other way, and he reminded delegates they had recently agreed to create a single agency to address women’s issues.

Along similar lines, he said the Assembly also had reaffirmed the responsibility to protect.  “Where conflicts arise, justice and accountability should follow,” he said, which was why the work of the International Criminal Court was so vital.  He looked forward to the Review Conference next May as a chance to strengthen its mandate.

Turning to the United Nations’ work in the field, he said none of those noble goals could be achieved without peace, security and justice.  In Darfur, that meant consolidating progress and delivering on the mandate.  While the mission would be 90 per cent deployed by year’s end, it lacked critical assets, and in that context, he urged continued work to stabilize the Sudan and to shore up the comprehensive peace with the Southern Sudan.

Noting that Somalia continued to demand attention, he said the United Nations, in Sri Lanka, would continue to press for settlement, reconciliation and respect for the principle of responsibility.  He welcomed the Government’s pledge to allow all displaced persons to return by the end of January.

In Myanmar, the release of some political prisoners last week fell short of what was needed, and he called for doing “much more” in the best interests of the country and its people.  If next year’s elections were to be accepted as credible, all political prisoners –- including Daw Aung San Suu Kyi –- must be released.

In Gaza, people continued to suffer, he stressed.  Issues of justice and accountability had to be addressed and he urged reviving negotiations towards a two-State solution and comprehensive peace in the Middle East.  He supported United States President Barack Obama’s efforts for the resumption of peace talks and would work within the Quartet to that end.

On a final note, Mr. Ban reminded delegates that their common ambition should be to make the United Nations’ outward renovation work a symbol of the Organization’s inward renewal.  The United Nations had made progress in “Delivering as One” and in “getting peacebuilding right” so that societies emerging from war did not slide back into conflict.  It had created the Department of Field Support and was developing the “New Horizons” strategy to make peacekeeping more agile and effective.

“We need the strong support of Member States, just as we do to secure the safety of our brave staff serving in dangerous places,” he said.

In his travels from the Arctic ice rim to the steppes of Mongolia, to the Democratic Republic of the Congo, and to summits in Trinidad and Tobago, London and L’Aquila –- he had spoken out on one point above all others:  the United Nations was the voice of the voiceless, the defender of the defenceless.

“If we are to offer genuine hope to the hopeless, if we are to truly turn the corner to economic recovery, then we must do so for all nations and all people,” he said.  “We are here to take risks, to assume the burden of responsibility, to rise to an exceptional moment, to make history.”  This year, of all years, asked no less.