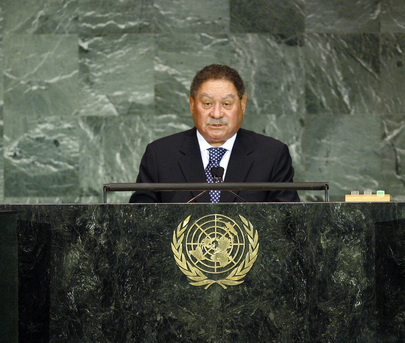 FRADIQUE DE MENEZES, President of São Tome and Príncipe, reminded delegates that though a year had passed, the world had not fully recovered from the effects of the economic and financial crisis.  The same distortions remained and the biggest challenge lay in guaranteeing the future of the planet, especially on the economic and environmental fronts, areas that were particularly important for small island nations such as his.

Noting that his country’s carbon emissions were insignificant, he said, “Time is no longer on our side, but has become our unforgiving judge.”  There was no time for unfounded justifications for non-fulfilment of the Kyoto Protocol.  As such, he called for urgent and concrete measures to address that crisis.

Turning to the Secretary-General’s report on the work of the United Nations, he said there was an urgent need to reform the Organization.  African countries, and especially small nations on the periphery, were mired in the deepest poverty. Such problems were particularly difficult to solve and needed more diligent attention from the international community.

Regarding peace and security, he called for rethinking the world order.   São Tome and Príncipe was small and vulnerable.  Challenges should be faced through a multilateral approach, based on international law and the United Nations Charter.  Reform of the Security Council was a question that could not be delayed forever.  African States must have a voice in that body, and they could not be “cast aside” when decisions were made that affected the entire Organization.  He strongly supported the African Union’s call for Africa to be represented on the Council.

On the Millennium Development Goals, he said that the world was far from making its desired progress to achieve those noble targets.  For its part, São Tome and Príncipe had made determined efforts, especially to achieve health and education objectives.  “We are almost there”, he added.  Also, temperature rise in recent decades had caused glaciers and polar ice caps to melt which, in turn, had caused sea levels to rise.  Climate change was a huge strategic challenge for all nations, as it raised security challenges, he said, and called for “substituting” the Kyoto Protocol.

The path ahead was long and arduous, he said, appealing for greater cooperation between developed and developing countries, donors and recipients.  Consultations should not be limited to Government officials; they should include recipients of the programmes designed to increase development.  The United Nations was an indispensable organization and must continue its mission to maintain peace, security and international organization.