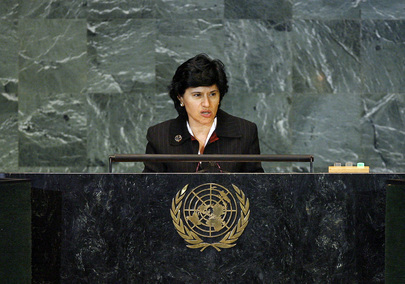 ANTONELLA MULARONI, Minister for Foreign and Political Affairs of San Marino, said reform of the United Nations was “fundamental to future world stability.”  As part of that process, the Organization’s main bodies must be revitalized.  Indeed, the Assembly must become more efficient and the Council must become more democratic, transparent and accountable.  Given the numerous interrelated challenges of today’s world, global and coordinated action was of the essence, she said, adding that if the Organization relinquished its role as leader of the global governance system, it would be “a defeat for all”.
With regard to the current economic and financial crisis, she said that it was “the greatest global disaster since the very existence of the United Nations, all the more because it has added to a severe food crisis affecting many regions of the world.”  It was the Organization’s task to consider the impact on Millennium Development Goals attainment and to find ways in which the fallout of the crisis could be mitigated.
On the subject of climate change, she said that it had become a central issue, “an absolute priority on the political agenda of all States”, and that it was her country’s aim to educate the citizens on the need to face climate changes.  As to terrorism, she lauded the Global Counter-Terrorism Strategy, adopted by the Assembly in 2006, as it laid the foundations for a coordinated response and recognized the need to respect human rights.  “However, an effective response to terrorism must also be based on education, understanding and respect for each other,” she said.
Concluding on the subject of human rights, she touched on the plight of children, and women in particular.  Today, 9.2 million children under the age of 5 died every year from largely preventable causes, and more than 100 million school-age children did not have access to education, she said.  Many children were also victims of sexual violence, used as soldiers or sold as sex slaves, she said, and applauded the work of the United Nations Children’s Fund (UNICEF) to improve the lives of these children.  Finally, she noted the adoption of the Convention on Cluster Munitions and the importance of giving new momentum to the disarmament process.  “The protection of human rights is strictly connected with the need to guarantee every human being and every population the possibility to live in peace and justice.”