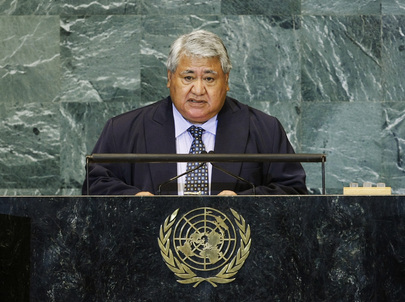 TUILAEPA SAILELE MALIELEGAOI, Prime Minister of Samoa, said recent crises highlighted the world’s interconnectedness and interdependency.  Their effect, although caused by a few, had not differentiated between the rich and the poor, the developed and developing world.  Yet the crises seemed imminently solvable and short-term in the shadow of the climate change challenge.  The core message of the past week’s climate change summit was clear:  it was a real phenomenon that was already occurring, and its stark reality could no longer be ignored.

He stressed that climate change was not a concern for small island developing States alone.  Indeed, the countries most responsible ‑‑ the main carbon emitters ‑‑ could not be absolved of the burden of leadership.  In that light, a Copenhagen climate pact was a must.  It required a new brand of cooperation and a broad outlook.  Indeed, climate change was everyone’s job.  It posed a test for multilateral solidarity.  With the effects worsening daily, the blame game was no longer an option.  The divergent, yet inextricably linked interests of Member States demanded that they “seal the deal” in Copenhagen.

Samoa had found the cost of adaptation and mitigation at the national level to be prohibitive, specifically, the cost of relocating people living along the coastline, he said.  But that had not deterred his Government.  By partnering with the international community, it was bolstering its resilience to the impacts of climate change.  He highlighted Samoa’s plantation access roads programme.

Turning to the financial crisis, he said the economies of small and vulnerable island economies had not been spared.  Samoa’s small economy had contracted, narrowing the Government’s revenue base and making impossible the kind of stimulus package that would meaningfully mitigate the recession’s impacts.  Thus, effective, short-term assistance in the form of direct budgetary support was needed now.  The decision to graduate Samoa from the least developing countries list in December 2010 had not taken into account the ravages of the financial crisis.  But given its impact, an extension of the transitional period was both necessary and justified.

He said that with the Millennium Development Goals set to be reviewed next year, Samoa regarded its scorecard with “guarded optimism”.  Yet, its needs were not matched by its resources, and the lack of aid response from donor partners was justifiably alarming.  If support for the relatively modest needs to achieve the Goals was not granted, the prospects for an effective global response to climate change all but vanished.  Further, while the Pacific region remained relatively calm and stable, that tranquillity masked the acute economic vulnerability of small island developing States there.  Given the nexus between economic stability and peace, it was expected that the world would be eager to assist development efforts in the region.  But, that belief had not been borne out.

Concluding, he expressed hope that the United States’ effort to relaunch the stalled Middle East peace talks would forge a permanent solution to the Israeli-Palestinian conflict.  The global menace of international terrorism should also be addressed through concerted multilateral action.  Samoa hoped the Comprehensive Nuclear-Test-Ban Treaty would be ratified by the United States and would soon enter into force.  The Security Council, as part of its reform, should be expanded, and countries like Japan should assume permanent member status.