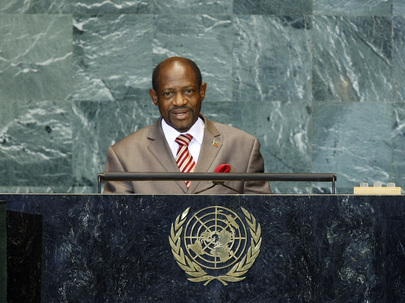 DENZIL L. DOUGLAS, Prime Minister and Minister of Foreign Affairs of Saint Kitts and Nevis, urged the Assembly to view the world from the perspective of a small middle-income heavily-indebted country.  The very real vulnerabilities of small States with a high per capita gross domestic product (GDP) should be more clearly reflected in multilateral policies, as the global economic system was restructured.  He sought support for new debt forgiveness, as the international financial institutions were reformed.  Small vulnerable economies usually paid a disproportionately high price when global crises occurred, and the voices of those countries should play a part in the creation of a new financial architecture.

He said that the Caribbean countries had repeatedly called on the international community to recognize the special circumstance of the small island developing States, as a practical way to address their complex issues.  The interconnectedness of the planet was most obvious in the issue of climate change.  While Saint Kitts and Nevis had tiny carbon footprints, the negative impact of climate change and global warming did not discriminate.  The geography of the small islands was changing as sea levels rose and marine life diminished. Coastlines and reefs were adversely impacted and the long-term implications for food production were dire.  He urged the major global emitters to lead in ensuring that the small island countries had the resources to meet their adaptation, mitigation, technology transfer and capacity-building goals.  He urged the emitters to compensatethose countries for the risk and losses stemming from climate change.  He also urged the United Nations to strengthen and finance the “SIDS Unit”.  He welcomed the session’s work towards the five-year review of the Mauritius Strategy for the Sustainable Development of Small Island Developing States.

Concerning the emerging trend of crime and violence among youth, he said studies showed that victims and perpetrators of crime were increasingly young men.  Youth alienation, rage and brutality were troubling global phenomena that demanded global analysis and action.  With its unique capabilities, the United Nations should marshal all available resources to identify the factors behind that destabilizing trend and decide how to reverse it.  The human, social and financial costs of violence were unacceptably high, and he called upon Member States to join Saint Kitts and Nevis in tabling a resolution to support a multisectoral response to violence and place the issue on the agenda of the Assembly’s sixty-fifth session.  While commending the Organization’s assistance to Member States in crime-fighting efforts, he urged it to reopen the United Nations Office on Drugs and Crime (UNODC) in the Caribbean.