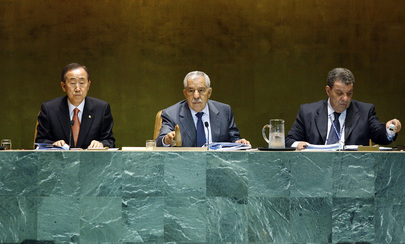 ALI TREKI, President of the United Nations General Assembly, said the sixty‑fourth session was taking place as the international community faced multiple crises and enormous challenges in areas from international peace and security, to environmental degradation and climate change, to extreme poverty and deadly infectious diseases.  The setbacks to the achievement of the Millennium Development Goals; the economic, financial, food and energy crises; disarmament and non-proliferation were all challenges in the backdrop of this session.

Those challenges could only be addressed through a well-functioning multilateral system that would ensure effective and collective action.  As the embodiment of multilateralism, the United Nations was the most legitimate forum for ensuring concerted global action.  The Assembly was “the chief deliberative policymaking organ of the United Nations”, and held a global membership and legitimacy unmatched by any other organization.  Mr. Treki pledged to work with Member States to forge a consensus on a revitalized Assembly, a more representative and reformed Security Council, and other initiatives to improve the effectiveness and management of the Organization.

Turning to crucial issues facing the world, he said the international community needed to work towards a global climate change agreement in Copenhagen and a more comprehensive and coherent approach towards peace, security and development in Africa.  He said the upcoming high-level Assembly meeting, scheduled for the start of the sixth-fifth session in 2010, would be held just five years before the achievement of the Millennium Development Goals and offered an opportunity to identify the impediments to progress towards the Goals.

Supporting post-conflict peacebuilding would continue to be a major concern for Member States, as would the promotion and protection of human rights.  He noted that the Assembly would review the follow-up to the outcome of the Durban Review Conference as racial discrimination, xenophobia and intolerance challenged societies across the globe.  The Assembly would be required to support the development of the Human Rights Council.  The question of Palestine and the Arab-Israeli conflict remain unresolved despite its place on the Assembly’s plenary agenda for many years, and still posed a serious threat to international peace and security.  A comprehensive and lasting settlement was needed, he said.