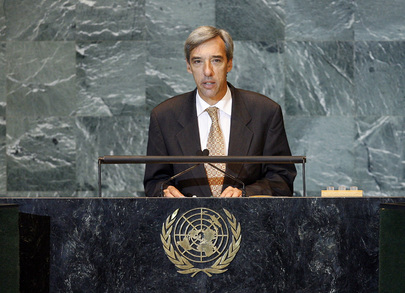 JOÃO CRAVINHO, Secretary of State for Foreign Affairs and Cooperation of Portugal, said climate change was a moral imperative and a matter of survival.  Its consequences were evident in all States, including Portugal.  Action on climate change could no longer be put off.  It called for action now, recognizing that countries needed help in their adaptation and mitigation efforts.  States must assume bold commitments at the December Copenhagen Summit, within the measure of their respective responsibilities and capacities.
The Assembly resolution on the international security impact of climate change had been a good step, but there must be follow-up.  The climate debate must continue and must take into account the question of energy, he said, noting that Portugal planned to produce 45 per cent of its energy from renewable sources in 2010.  By 2020, the figure would be 60 per cent.  Portugal had one of the lowest carbon emission rates in Europe.  It was available to share experience in the area.
He went on to say the international financial system must be guided by responsibility and transparency.  Regulation and supervision must be strengthened.  The international market must be based on shared values, principles and patterns of conduct.  The solution “was not, is not, and will not be protectionism,” he stressed.  Closing the door to neighbours and partners meant leaving people in poverty.  Rather, the Doha Round of World Trade Organization negotiations must be concluded in a way that corresponded to global sustainable development objectives.
Commitments to the Millennium Development Goals must be renewed so that the crisis did not affect the gains already made.  He said any State that forgot the common good would have instability, poverty and insecurity knocking at its door, sooner or later.  Portugal was currently a co-president of the Africa Partnership Forum.  Through that body, the specific concerns of Africa had been conveyed to the G-20.
He pointed to Guinea-Bissau and Timor-Leste as two countries showing the growing activity of the Community of Portuguese Speaking Countries in promoting peace, democracy, human rights, political stability, and development, both social and economic.  Portugal had assumed the temporary presidency of the Ibero-American Conference, whose summit would take place this year in Estoril, and would focus on innovation and knowledge.  In its capacities with those two organizations, Portugal had supported the participation and involvement of emerging economies and developing countries in the debate on reform of the international financial institutions through regional institutions.