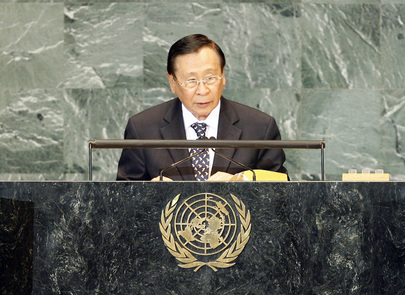 ALBERTO ROMULO, Secretary of Foreign Affairs of the Philippines, said the signs of global recovery from crisis did not signal either the right to complacency or to return to business as usual.  The drive for global development had slowed while challenges to peace remained stark.  No peace dividend had resulted from the end of the cold war and both nuclear proliferation and violent conflict continued.  Shortfalls in aid resources and faltering trade and investment were generating a global development emergency.  Many nations would not reach the Millennium targets.  Still, the march of progress must continue by focusing on five great challenges of the times.

The first of those challenges was a need for nuclear disarmament and non-proliferation, he continued.  The second was to manage the global crisis in a way that encouraged equitable recovery, fairer globalization and faster poverty alleviation.  The next challenge was to protect and promote the rights of migrants who continued to contribute to global development and the well-being of world society.  And the last two were addressing the adverse effects of climate change, and reducing conflict while deepening understanding and respect through interfaith and inter-civilization dialogue.

Detailing actions to be taken in each area, he emphasized the need to ratify the Comprehensive Nuclear-Test-Ban Treaty and the Nuclear Non-Proliferation Treaty as key pillars in the global disarmament and non-proliferation regime.  The few countries that had not yet done so should accede to both.  On recovery from crisis and a new globalization, he said the lines of action adopted at the June United Nations conference should be implemented, along with the International Labour Organization’s Global Jobs Pact, adopted in July by the Economic and Social Council.  And since migrants were among those most adversely affected by the economic crisis, their rights must be protected by implementing the outcome of the Philippines-sponsored Second Global Forum on Migration and by accession to the Convention on Migrant Rights.  On climate change, the Philippines had hosted the International Conference on Green Industry in Asia earlier this month, and the resulting Manila Declaration would provide inputs for Copenhagen.

After touching on his country’s role as the biggest police contributor to peacekeeping missions, he said there was an urgent need to reduce tensions based on cultural differences.  The Philippines had taken the lead in that effort by tabling an annual General Assembly resolution and thought the 2006 launch of a New York-based Global Tripartite Forum comprising 54 Governments, 15 United Nations agencies and 110 religious non-governmental organizations.  The First Special Non-Aligned Movement Ministerial Meeting on Interfaith Dialogue and Cooperation for Peace and Development would be held in Manila in December.