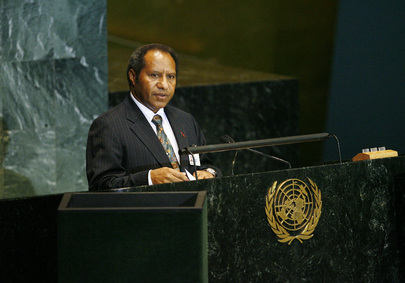 SAMUEL ABAL, Minister of Foreign Affairs, Trade and Immigration of Papua New Guinea, said his country firmly believed that strengthening international peace and security was fundamental to achieving human development, progress and prosperity.  Papua New Guinea denounced weapons of mass destruction and was fully committed to the principle of a world free of such weapons.  To that end, it was a State party to the South Pacific Nuclear-Free-Zone Treaty and was supportive of the South-East Asia Nuclear-Weapon-Free Zone.  Papua New Guinea was now working earnestly towards early ratification of the Nuclear Non-Proliferation Treaty and the Comprehensive Nuclear Test Ban Treaty.  It also looked forward to contributing constructively to the United Nations peacekeeping operations.
A continuing major concern for Papua New Guinea was the increase in global conflicts heightened by illicit trade and use of small arms and light weapons, he continued.  That situation continued to cause untold suffering to millions around the world, and Papua New Guinea was no exception.  Global debate on small arms had focused on curbing the use of such weapons, but the supply side of the issue had never been comprehensively discussed.
Papua New Guinea, therefore, supported the proposed Arms Trade Treaty which was still under negotiation and which would deal with one of the key elements in the arms issue.  He stressed that small arms and light weapons threatened communities in his country.  The Government had prioritized the need to comprehensively address that issue through commissioning a 2005 National Gun Summit Report which would be implemented soon.
Turning to the various global crises, he expressed strong support for calls to reform the international financial architecture to include major developing countries like China and India.  Such reforms would better reflect today’s global economic realities and provide effective management of the global process which needed to be fair, equitable and transparent.
Achieving the Millennium Development Goals remained an integral development priority of the Government, he continued.  Those Goals had been incorporated into Papua New Guinea’s medium-term development strategy, focusing on 15 national targets and 67 indicators under a national road map.  Those targets and indicators had been specifically designed to reflect the country’s stage of development.  A joint Millennium Development Goals project was launched in 2008 along with a National Steering Committee made up of representatives of the Government, the United Nations, academia and civil society.  It was mandated to build national awareness and to facilitate a strong data collection and analysis regime in the country.