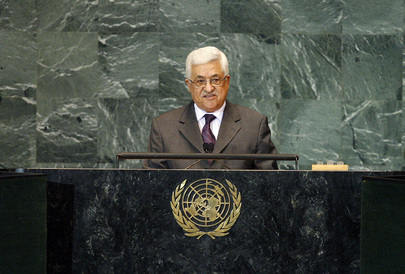 MAHMOUD ABBAS, President of the Palestinian Authority, said there was a full agenda before the Assembly and the world’s peoples were looking for what could be done to save the planet from climate change, address the international financial crisis and reform the United Nations, including the Security Council, to reflect the current global situation.  Such common concerns must not hide or ignore that there were serious problems in the Middle East, the foremost of which was the lack of commitment to the United Nations Charter.
While all agreed on the need to achieve Middle East peace, counter extremism and violence, and establish a regional nuclear-weapon-free zone, the deeper tragedy remained the suffering of Palestinians since Al-Nakba more than 60 years ago, to which the United Nations had borne witness, as its archives held hundreds of unimplemented resolutions.
Palestinian suffering resulting from Israel’s colonial occupation was clear, he explained.  Since the occupation of the West Bank and Gaza Strip, including East Jerusalem, in 1967, Israel had continued its settlement policy on Palestinian land, especially in Jerusalem, where it had been accelerated through seizure of Palestinian homes.  New settlement neighbourhoods were being built and Jerusalem was growing completely isolated due to settlements and the “apartheid wall”.
“We are facing a unique situation,” he said.  If international law did not allow the acquisition of territory by force, how would the current situation be addressed?  Israeli settlement policies were undermining the goal of establishing a geographically contiguous Palestinian State, contraveningvarious resolutions, including the Road Map, which was based on land for peace.
While many conferences had been held since the signing of the 1993 Oslo Accords, conflict persisted, he said.  United States President Barack Obama had given hope to Palestinians with his vision of a peace agreement on the basis of a two-State solution and the end of settlement activities.  He welcomed such active United States diplomacy to revive the peace process and efforts of the international Quartet.
Such efforts had been confronted with Israeli intransigence, and refusal to adhere to requirements for re-launching the peace process.  How could one conceive of holding negotiations without agreement on the terms of reference, and the objective that the whole world had unanimously agreed upon, namely ending Israeli occupation of the territories occupied in 1967, establishing a State of Palestine with Jerusalem as its capital, and reaching a just solution to the question of Palestine refugees on the basis of resolution 194 (III) (1948)?  In that context, he expressed deep appreciation for President Obama’s recent speech, in which he had reaffirmed the need to end the 1967 occupation and the illegitimacy of the settlements.  He also stressed the need for addressing final-status issues, including Jerusalem, refugees, borders and water.
Reaffirming his interest in achieving a just, lasting and comprehensive peace, he cautioned that the settlement policy and building of the separation wall would abort opportunities to re-launch the peace process.  “Time is running out and the risks are becoming greater as a result of the continued suffering of the Palestine people under the last occupation in the world,” he said.  With that, he called on the global community to exert pressure on Israel to cease its settlement activities, comply with agreements, end occupation policies, release some 11,000 prisoners and lift the unjust siege imposed on the Gaza Strip, which had caused thousands of casualties.
Palestinians were also keen to end internal division and restore their national unity, which Egypt, Arab countries and others were making “commendable” efforts to achieve.  Palestinians had made progress in building institutions and promoting economic and social development despite the harsh conditions of occupation.  Notably, they also would be “resorting to the ballot boxes”, with presidential and legislative elections to be held under the supervision of Arab countries and the United Nations.
“Hope will remain alive in our souls,” he said, and Palestinians would not despair to regain their rights on the basis of relevant United Nations resolutions.  Reaffirming his commitment to the Road Map, the Arab Peace Initiative and all terms of reference of the political process, he called on all parties to abide by those strategies with a view to re-launching a successful peace process.  He was confident that Arab countries would adhere to the Arab Peace Initiative as a foundation for safeguarding Palestinian rights and a way forward for peaceful relations once an independent State of Palestine was established.