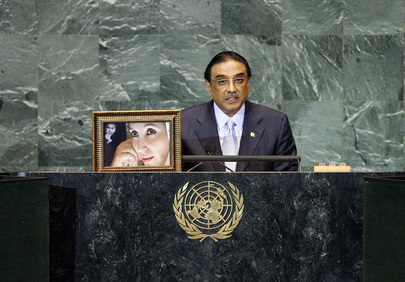 ASIF ALI ZARDARI, President of Pakistan, said his country would work to fashion a better and safer world in which everybody lived in peace and harmony.  Pakistan had witnessed profound democratic change and had entered a new era of democracy, rule of law and human rights.  Democracy, for which Pakistan had struggled hard, was not only crucial for his country but also for the region and the world.  He recalled his late wife Benazir Bhutto’s tireless efforts in her fight for democracy, which led to her tragic death, and hailed international efforts to investigate her assassination.
Democracy in Pakistan had begun to successfully fight militancy.  The challenge now was to make democracy sustainable and irreversible, and to give people peace and stability, progress and prosperity.  Following decades of conflicts, he said Pakistan had suffered greatly from terrorism and extremism, which was based on exploiting Islam in the name of jihad, allowing warlords and criminals to destroy civilizations to come.
“The virus [spread] and affected the world.  We must strike at its roots.  Surgery alone will not be enough.” he declared, adding that Pakistan stood fully united in that struggle.  Democracy and political ownership of the combat against terrorism were key weapons in the fight against militancy and extremism.  Indeed, Pakistan’s law enforcement authorities had, within a short period of time, cleared militants from large areas in Malakand.  Further, most of the 2.5 million people displaced from that region had returned to their homes, and the Government was currently helping them rebuild their lives.
He went on thank those that had supported Pakistan’s efforts to defeat the militants, and urged the international community to reinforce its help and support in that regard.  And while Pakistan was determined to wipe out terrorism and extremism, the early return to peace and stability in Afghanistan was critical.  He called for international support during the reintegration of Afghan refugees, 3 million of whom had been sheltering in Pakistani territory over the past three decades.
Continuing, he said the flow of weapons across the region must stop, and the funding of drug barons and other criminal elements must also cease.  Pakistan believed regional efforts could ensure peace and stability and combat terrorism and extremism.  He urged world democracies to do more for peace and development in areas where militancy and terror had struck, stressing that it was necessary to create more economic opportunities for people.
He expressed his country’s wish to be on amicable terms with neighbouring India, citing that he looked forward to resuming the composite dialogue process, and finding a peaceful solution to pending disputes such as the Kashmir issue, to ensure lasting peace and stability in South Asia.
On other global issues, he called for the immediate release of Aung San Suu Kyi, as well as for the full implementation of United Nations resolutions guaranteeing the rights of the Palestinian people.  Noting that all States sought peace and security, he called for equal security among all nations, saying that was fundamental to ensuring arms control, disarmament and non-proliferation.  Pakistan would carry on playing a role in promoting conflict-resolution in South Asia and non-discriminatory nuclear disarmament and non-proliferation initiatives, he added.