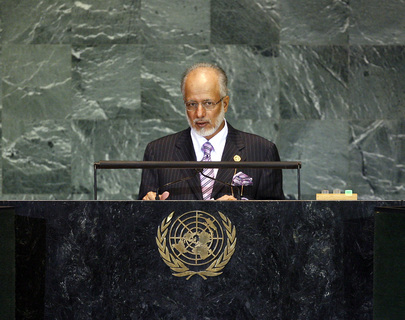 YOUSEF BIN ALAWI BIN ABDULLAH, Minister of Foreign Affairs of Oman, declared that the United Nations had made great achievements in its more than 60 years of existence.  However, the Palestinian issue remained unsolved despite the efforts of Arab countries and the wider international community.  The Arab Peace Initiative was the most appropriate way to settle the Arab-Israeli conflict, which should include the return of Arab lands occupied since 1967, the establishment of an independent Palestinian State on the west Bank and the removal of all illegal Israeli settlements.  “We call upon Israel to seize the historical opportunity to establish a just and comprehensive peace in the Middle East,” he said.
Turning to the situation in other countries, he welcomed recent positive developments in Iraq, and expressed the hope that such developments would continue in order to achieve security and stability there, as well as contribute to the success of comprehensive national reconciliation efforts.  With regard to Darfur, he looked forward to seeing positive results from the relevant peace talks, and hoped that the concerned parties could reach a political agreement that would achieve stability and security.
As for Somalia, he welcomed efforts to achieve peace, and called all parties within the country to renounce violence.  He also expressed support for international efforts to combat piracy in the Horn of Africa.  On Iran, he welcomed cooperation between Iran, the international community and the International Atomic Energy Agency.
In terms of the global economy, he said there was no doubt that efforts exerted by rich industrial nations had restored stability to capital markets, but urged for more efforts to arrive at consensus on the Doha Round of trade talks, which would take into account the interests of all Statess.  He also called for wealthy countries to increase spending on agriculture research, food security, and the provision of water and medicine.
He reaffirmed Oman’s condemnation of terrorism in its forms and manifestations, and emphasized the continuing support to eliminate and combat it, according to international conventions and treaties. He said that the country would cooperate with the United Nations and international community in combating terrorism.
He turned to environmental issues, saying that Oman was making great efforts to preserve its territorial waters and was enacting legislation in order to put environmental considerations in line with development strategies.  He hoped the United Nations Climate Conference, set to be held in Copenhagen this December, would lead to a long-term practical plan to protect the environment.