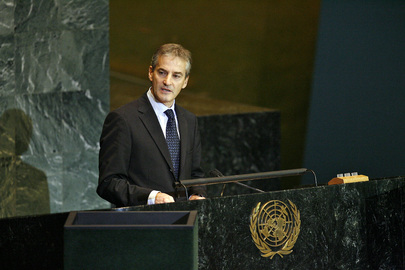 Jonas Gahr Støre, Minister of Foreign Affairs of Norway, said that this was a moment for all to seize. "The new tone of voice we have heard from the United States [.] is setting forceful persuasion above persuasive force and extending a hand to those who are willing to unclench a fist," he said. The challenges ahead for the international community included crises of finances, food, energy, climate and health, and required collective action, he said. On climate change, he said the large, developed countries should commit themselves to measurable, reportable and verifiable actions.
Turning next to the global economic and financial crisis, he said that it had negatively affected the attainment of the Millennium Development Goals. To counter that, Norway had increased its official development assistance in absolute terms after the financial crisis hit, "to show solidarity with those who are less fortunate than we are". Norway had also tripled its health-related contributions since 2000 and millions of lives had been saved.
Maternal health, however, remained a particular concern, he said, and reducing mother and child mortality was pivotal, he said, adding that there had been an appalling rise of rape and other forms of sexual violence that "reveal an ugly story of men around the world still regarding women and children as secondary citizens". To give women the services and rights that men take for granted, was a matter of vital importance, he said.
On security, he said the international community should continue to support the United Nations Assistance Mission in Afghanistan (UNAMA), and that, in terms of nuclear disarmament, the Review Conference of the Nuclear Non-Proliferation Treaty next year had to set a clear and specific agenda for the eradication of nuclear arsenals. Regarding Iran, he said that Iran itself should remove the doubts surrounding its nuclear ambitions.
Beyond nuclear weapons, he said that small arms, cluster munitions and landmines were responsible for actual destruction of mass proportions, and he urged all States to accede to the Convention on Cluster Munitions and to try to control the small arms trade. Finally, he said that Norway had been elected to the Human Rights Council and that, last week, the country had submitted its first report on the human rights situation in Norway to take a critical look at its record and invite constructive criticism "as we believe all States should welcome similar constructive criticism of their own records".