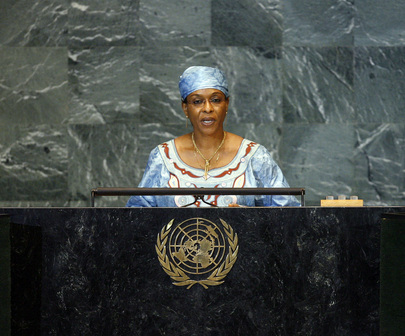 AICHATOU MINDAOUDOU, Minister of Foreign Affairs of the Niger, declared that observing the theme of this year’s general debate -- multilateralism -- would help realize the objectives of peace and development.  In addition, multilateralism, which was evidenced by cooperation between the Security Council and other regional organizations such as the African Union, would produce lasting solutions towards peace and security in Africa.
She said that progress had been achieved on conflict prevention and management -- and that there was goodwill and concerted action on peace.  The Tripoli Summit had reflected a desire to take on issues that had always halted progress, she said, and thus, the theme of multilateralism had taken on real meaning.
She declared that the United Nations must be “a melting pot to achieve a more balanced community” and that all States must tackle and manage the effects of the global financial crisis.  In addition, she mentioned the need for inclusive solutions to other issues:  food security; climate change; and conflict resolution.  Further, the global financial crisis had highlighted “our ongoing concern for a more inclusive transparent approach that would take into account the concerns of large and small countries”.  Progress had been mixed and meant that “we must step up to make sure we respect our commitments.”
The Niger, for its part, had made progress in fighting poverty and in grass-roots development through specially designed projects in nearly all sectors, including the deepest corners of the country.  Those projects included schools, clinics, wells, drinking water, and micro-credit programmes, especially for rural women, who were often the most vulnerable.
She mentioned a referendum in August 2009 to adopt a new constitution, which would allow for a new presidential regime.  She reassured development partners and civil society who were concerned with the political situation that Niger was “not in a situation of lawlessness or insurrection”, but a place where everyone could express his or her opinion.  The Niger was resolutely committed to building its future and helping its people to overcome poverty.
Turning to disarmament, she said Niger was at the forefront of the continent’s discussion of that issue, and she noted that her country had ratified several agreements on small arms and light weapons, an important contribution to peace.  Highlighting several other issues, she called for a greater recognition of Africa’s role on the Security Council and also expressed hope that the upcoming Copenhagen Summit on Climate Change would heed results.
She expressed gratitude to the Assembly President’s decision to devote attention to dialogue among cultures and civilizations, and urged that “we must maintain the momentum”, something which was helped by high-level meetings on religions and civilizations, as well as an upcoming conference in the Philippines on inter-religious dialogue.