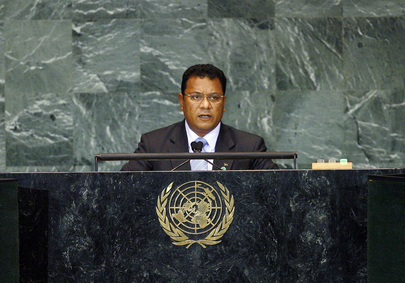 MARCUS STEPHEN, President of Nauru, said the new millennium had been no stranger to crisis.  The world had seen how ideological extremism could foment turmoil, learned that financial instability could quickly spread across global markets, and been reminded that, “We disrespect the environment at our peril.”  While global challenges might shock, they should not surprise:  most stemmed from problems that had been allowed to fester for years, if not decades and all were inextricably linked to the global community’s choices about commerce and development.  As they were global in nature, they required a global response, and he called for revitalizing international systems of governance.
Large countries tended to dominate international fora and drown out others.  “In the case of climate change, I mean this quite literally,” he said, urging that States consider the impacts of activities on the most vulnerable.
In addition, he said the global community should renew its commitment to the Millennium Development Goals, explaining that after success in the 1990s, progress had slowed.  In the Pacific, where nearly 40 per cent of the population lived on less than $1 a day, the Asian crisis devastated many regional economies, while the recent spike in food and energy prices strained limited resources.
The Pacific confronted unique challenges in reaching the Goals, as the region’s remoteness made it difficult to access world markets and increased the costs of doing business.  By way of example, he said that for most countries, the food crisis had eased, as commodity prices had fallen, but in Nauru, the price of a bag of rice increased by 80 per cent in the past year, hovering now at above $60.  The rest of the world paid less than $25.  The time had come for the global community to deliver on its promise and dedicate 0.7 per cent of Gross National Income to helping developing countries meet their goals.
In addition, it was vital that the United Nations boosts its engagement in the Pacific, he said, noting that Nauru had requested the Organization to open an Office there for the past four years.  It was critical that United Nations agencies work more closely with national Governments to ensure that accurate data was available for planning and policymaking.  The temptation to add “layers upon layers” of new programmes also must be avoided.
Continuing, he said the international community also had to reform the world financial system so that developing countries could equitably share in economic prosperity, explaining that reforms should aim to facilitate growth in developing nations and increase their resilience to abrupt economic fluctuations.
Calling for swift steps to mitigate climate change, starting with a bold agreement in Copenhagen, he said climate change presented the greatest threat to small island developing States such as his.  Flooding was already eroding Nauru’s shores and contaminating its water supply, while ocean acidification was damaging the marine ecosystems it depended on for food and livelihood.
While science called for reducing greenhouse gas concentrations to 350 parts per million, most developed nations had proposed targets that would result in far higher concentrations, he said.  That was not acceptable.  If an engineer said eight columns were necessary to support a building, would any responsible person recommend using only four?  “Then why are the most vulnerable countries asked to accept proposals that would surely lead to our extinction?”  Developed countries must also provide the financial, technical and human resources necessary for developing nations to address a problem not of their making.
Continuing, he said Taiwan could contribute to cooperation on climate change and should be invited to play a larger role in the United Nations system, particularly in the United Nations Framework Convention on Climate Change process.  It was also vital that the Security Council monitor developments and pay special attention to the most vulnerable groups in the world’s poorest countries, including women and children and indigenous persons.
As for Security Council reform, he said the Council should become more representative in permanent and non-permanent categories, to reflect current geopolitical realities.   Japan, India, Germany and Brazil should be made permanent members and he called on the Assembly to accept Taiwan’s participation in its specialized agencies.
Discussing national developments, he said that, in cooperation with the Pacific Islands Forum, Nauru outlined key governance and development priorities in the Pacific Regional Assistance to Nauru, which included re-evaluating fiscal policies, reviewing the Constitution and reforming the education sector.  Such efforts were an example of how country-focused development aid could quickly lift a nation out of crisis and back onto the sustainable development path.  In that context, he expressed appreciation to Australia, New Zealand, Taiwan, Japan and the Forum Countries.
In closing, he said the United Nations system was born at a time of great crisis and ushered in over a half century of peace and prosperity.  However, the benefits were not equally shared and two thirds of humanity was largely lest behind.  The time had come to take up the project begun 64 years ago, so that future prosperity could be shared by all.