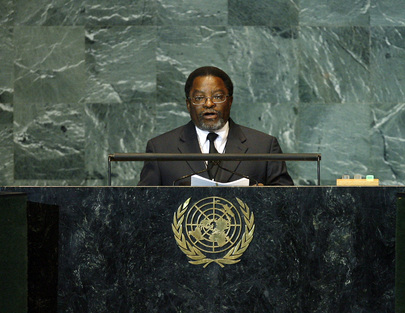 MARCO HAUSIKU, Minister of Foreign Affairs of Namibia, said the impact of the financial and economic crisis was a major concern that required efforts in the search for effective solutions.  Indeed, the crisis was taking a toll on every aspect of economic and social life, and progress made in the fight against poverty, hunger and disease was under threat.  As the economic upheaval had arrived amid food and energy crises, net-food importing countries, like Namibia, had had to divert resources from development to energy relief, while the import of high-priced food had destabilized balance of payments and State revenue.  The situation had been worsened by high fuel prices, and oil importers, like Namibia, had been negatively impacted.
The confluence of such crises, with the adverse impacts of climate change on sustainable development, was cause for great concern, he explained.  Namibia, like other developing nations, was an insignificant contributor to greenhouse gas emissions, yet among the most vulnerable to the impacts of climate change.  He called on major emitters to make drastic emissions cuts, and ensure that technology and financial resources were available to help developing countries adapt.  He fully supported the Secretary-General’s efforts to mobilize the political will to ensure a legally binding climate agreement in Copenhagen this December.
For its part, Namibia had made progress in the provision of health, education and other services, and was on course to meet various Millennium Development Goals, he said.  At the same time, it faced difficulties in responding to the combination of the HIV/AIDS pandemic, high food insecurity and poverty, and he therefore reiterated his call for increased global support for national sustainable development programmes, notably through concessional loans and foreign direct investment.
Turning to United Nations reform, he said that the process should be expedited, in order to deliver on promises in the maintenance of international peace and security, observation of human rights and environmental protection. There was an urgent need to reform the Security Council to make it more representative, democratic and accountable.  The need for Africa to be equitably represented on the Council, with all privileges associated with membership, was a priority, and Namibia stood by the common African position as outlined in the “Ezulwini Consensus” and Sirte Declaration.
He also welcomed the joint communiqué on strengthening African Union capacity in peacekeeping operations as a step in the right direction, saying there was a need for more formalized cooperation between the Security Council and the African Union Peace and Security Council, including in the areas of financing, logistics and technology transfer.  He called on the Assembly to pass a resolution prohibiting the participation of Governments that had taken power by military coup in all activities of United Nations bodies.