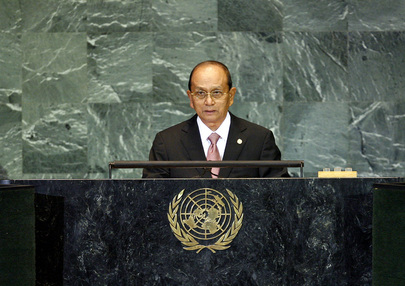 General THEIN SEIN, Prime Minister of Myanmar, began by saying the global economy was showing a tentative recovery; however, many nations still faced daunting challenges, with developing countries being hardest hit.  “The nascent economic recovery has yet to effectively lift low-income countries from the trough.”  He commended developed countries for taking the lead in addressing the crisis, but said the views of the developing countries must be considered.  Indeed, developing countries had worked hard to combat poverty, and thus, measures taken that could have adverse effects on economic growth should be avoided. Developed countries were also urged to increase their development aid, and he welcomed China’s pledge to increase support for countries hit by the financial crisis.
Turning to climate change, he acknowledged its threat and called for a global response.  He looked forward to the Copenhagen Summit in December and hoped for a new agreement to curb greenhouse gas emissions.  A multilateral approach was required to address both the issue of climate change and the economic crisis, as those problems exacerbated already existing challenges such as food and energy prices and pandemic diseases.  “No single country can effectively overcome these problems acting alone,” he said, adding that the global community must work together.
Speaking about United Nations reform, he called it the single world organization with near universal participation, but added that steps to make it more democratic, effective and accountable had been “painfully slow”.  He urged dialogue among nations of different religious and cultural backgrounds to contribute to peace, security and development.
Mankind’s greatest threat was weapons of mass destruction, particularly nuclear weapons.  “ Myanmar believes that the total elimination of nuclear weapons is the single absolute guarantee against the threat or use of those weapons,” he continued, expressing the hope that all nations would work towards the total elimination of such weapons.  However, nations must have the right to peaceful uses of nuclear energy, adding that nuclear techniques had widespread application in food, agriculture, health and scientific industries.
Moving on to the issue of sanctions, he said that some powerful countries had been resorting to economic sanctions to pressure developing countries, adding that they were a “political tool against Myanmar and we consider them unjust.  I would like to state that such acts must be stopped.”  He said the goal of sanctions was to influence political and economic systems without taking into account a country’s historical and cultural backgrounds.
A transition to democracy was proceeding in Myanmar, and a new State constitution had been approved by almost 93 per cent of the eligible voters in a nation-wide referendum in May 2008.  Multiparty general elections would be held in the coming year.  “The Government is taking systematic steps to hold free and fair elections,” he said, adding that multiparty general elections were a significant step in the transition to a peaceful, modern and developed democratic State.
Touching on cyclone Nargis, which hit Myanmar in May 2008, the Government and the United Nations and the Association of South East Asian Nations (ASEAN) had established the Tripartite Core Group to undertake relief and reconstruction, and that Group had been given due recognition by the international community.  The Post-Nargis Recovery and Preparedness Plan (PONREPP) had been laid down for 2009-2011, and would require $691 million over three years.  He said that to date, only half that amount had been committed by the international community.  However, the Government and people would always remain grateful for the generous help and assistance extended in their hour of need.