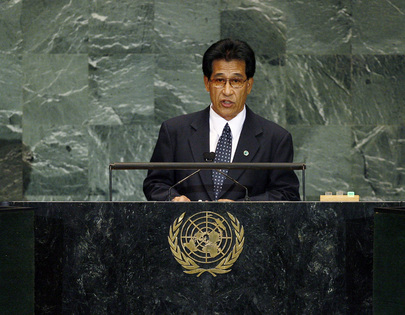 EMANUEL MORI, President of the Federated States of Micronesia, said the importance of Assembly resolution 63/281 on climate change could not be overstated; that phenomenon was a threat to international peace and security.  It was the defining issue of the day and should command attention and support from everyone.  In a spirit similar to when the world had stood together last year to avert global disaster in face of the economic crisis, the international community must now be bold enough to take equally swift and difficult decisions to blunt the impact of climate change crisis.  For Pacific islanders, as well as for islanders around the world, that issue was a matter of survival, he added.
Micronesia was already experiencing the brunt of the impact of climate change, including from the effects of rising sea levels an increase in the frequency and intensity of natural disasters such as typhoons, all of which were undermining development efforts.  Compounding the problem was the saltwater intrusion info freshwater aquifers or other sources that was damaging basic crops, including coconut trees –- “our tree of life”.  If melting of polar ice and glaciers reached an irreversible tipping point, Micronesia and all low-lying islands would disappear.  The impact would also endanger coastal cities and communities all over the world, including Manhattan.
Micronesia had submitted a proposal to the Secretariat of United Nations Framework Convention on Climate Change for evaluating rapid mitigation strategies by establishing an expert-led four-year programme of work to report on ways to achieve rapid mitigation through actions dealing with the short-lived non-CO2 agents, including “black carbon”, he said.  Together with Mauritius, it had also proposed an amendment to the Montreal Protocol aimed at phasing down production and consumption of hydrofluorocarbons.  The proposal would also expand efforts to destroy so called “banks” of discarded refrigerants.
Mr. Mori said that other priority areas for his country included working with other Governments in the subregion to meet the commitments of the Micronesia Challenge regarding conserving biodiversity and limited natural resources.  Micronesia was also seeking to acquire comprehensive broadband connectivity capacity through submarine fiber-optic cables. His country was undertaking a wide variety of tasks in order to achieve the Millennium Development Goals, but progress was inherently threatened by the nature of its vulnerability.
As an island State with a large Economic Exclusive Zone of confidence, abundant with marine and fisheries resources, Micronesia was concerned with unsustainable fishing practices and with the unabated incidence of illegal, unreported and unregulated fishing.  Collateral catches and discards in commercial fisheries deprived its people of their subsistence living.  The international community must help the islands in finding ways to minimize and eliminate that wasteful harvesting of resources.
Turning to Security Council reform, he said reform must include an expansion in both of its membership categories in order to reflect the present realities of the world in the new century.  In that regard, he reiterated his country’s support for Japan, India and Germany for permanent membership of the Council.  As a member of the AOSIS, the Federated States of Micronesia had repeatedly called for a strong agreement in Copenhagen that “must leave no island behind”.  Mistrust between countries could not become a reason for failure, nor could economics become an excuse for inaction, he added.