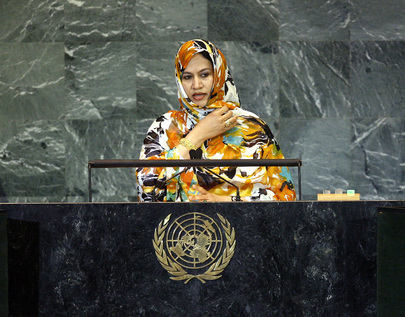 NAHA MINT MOUKNASS, Minister for Foreign Affairs and Cooperation of Mauritania, expressed her faith in the United Nations and commended the Secretary-General’s efforts towards broad attainment of the Millennium Development Goals. Mauritania was emerging from political crisis and had embarked on a process of resolution, which had been enshrined through the Dakar peace accord.  That, she said, provided for an elaborated electoral agenda that would be overseen by the Government and the Ministries of Home Affairs and Finance.
She went on to say that General Mohamed Ould Abdelaziz had been re-elected on 18 July winning 54 per cent of votes in a transparent poll that had been overseen by international monitoring bodies.  While thanking Libya’s President, Muammar Qaddafi, for being the first to call for a solution to normalize the situation in Mauritania, and Senegal’s President, Abdoulaye, Wade for accompanying the signing of the peace agreement, she reaffirmed that her country was determined to uphold peace, stability and the rule of law.  Also, Mauritania attached great importance to the Maghreb Union, the Arab League, and was likewise committed to the African Union and to the principles of the United Nations.
Turning to United Nations reform, she said a restructured Security Council was where Africa and the Arab world ought to have permanent seats, given that the latter made up 11 per cent of the world’s population.  The world continued to be wrecked by a financial crisis, which was preventing development, especially in least developed countries.  Those countries would face great obstacles, she warned, urging the international community to act rapidly so those nations could avoid disaster by restoring trust, building confidence, achieving economic progress and creating jobs.
She also urged the international community to provide financial aid to poor countries, citing previous pledges by developed countries to contribute $1 trillion to revitalize the global economy, $50 billion of which had been earmarked to help Africa and the least developed countries.  The economic, development and environmental dimensions of climate change were interlinked, she said.   Mauritania was one of the 10 most affected States by that scourge.  She requested developed countries to limit their greenhouse gas emissions, and expressed the hope that the forthcoming climate talks in Copenhagen would lead to a successful outcome.
Turning to regional peace and security, she said Mauritania followed the issue of Western Sahara very closely, and aimed at finding a final solution to bolster peace and stability in the region.  Mauritania rejected the International Criminal Court’s arrest warrant for the Sudanese President, Omar Bashir, she said, adding that it countered international law and hindered the peace process.