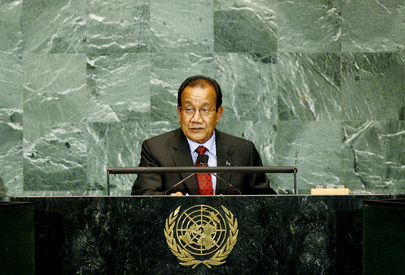 LITOKWA TOMEING, President of the Marshall Islands, said the United Nations joint offices in his country had brought the Organization’s ideals closer to the people, and expressed hope that the World Health Organization (WHO), United Nations Development Fund for Women (UNIFEM), Food and Agriculture Organization (FAO) and the Economic and Social Commission for Asia and the Pacific (ESCAP) would follow suit so as to produce concrete results on the ground.  He took note of the Secretary-General’s commitment to the challenges of climate change, particularly his recognition of the duty of larger economies to the most vulnerable, saying he considered the G-8 commitment made in L’Aquila, Italy, to be a necessary step forward.  He further hoped that the recent increased participation by the United States in climate debates indicated its intention to play a major role.

Noting that the major economies would be watchful that Copenhagen not excessively disturb their established way of life, he urged those nations to consider the implicit moral obligation that came with their privileged and affluent status.  For small island States, the question was whether Copenhagen would diminish or enhance their security and their chances of survival.  The success of Copenhagen would be judged by the extent to which small, low-lying States would feel safe and secure.  “In our interdependent global community, the moral duty of the collective must always be the protection of the most vulnerable and the weak.”

Copenhagen was not a competition for the survival of the few, he said.  “It is about unleashing moral and political forces and synergies inherent in the collective body of nations for the good of all.  What else does political will mean but this?” he asked.  Although the Marshall Islands’ rate of emission was insignificant in relative terms, the country had set a reduction target of 40 per cent by 2020 he said.  Towards that end, it had been pursuing the use of solar power, with nearly 40 per cent of households in the outer islands drawing on it as a main energy source.  That initiative would be pursued until all 33 islands were fully covered.  Even so, the funding for adaptation efforts was inadequate, a problem compounded by the complexity of accessing it.

Recalling the history of nuclear testing in the Marshall Islands between 1946 and 1958, he said he was encouraged by today’s Security Council session on nuclear weapons use and testing.  Sixty years since the detonation of some 67 nuclear bombs, the Marshall Islands was still grappling with their after-effects.  He called for a new perspective that would wipe the spectre of war and the use of nuclear weapons from the face of the Earth.  Banning nuclear weapons alone would not remove the root causes of war.  National leaders recognized the nature of the problem, but lacked the will to take action.  National interests must find their fuller expression when subordinated to the needs and interests of the planet.

On United Nations reform, he said evolving global affairs demanded a reconstitution of the Security Council’s membership and recognized “ Japan’s distinguished leadership and achievements in the area of human security”.  That made it deserving of a permanent seat on the Council.  He further commended the confidence-building process between China and Taiwan, noting that the latter’s membership in United Nations specialized agencies would enable its 23 million people to play an active part in the affairs of nations.