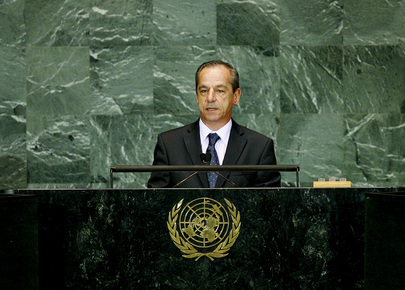 LAWRENCE GONZI, Prime Minister of Malta, said his country had celebrated the forty-fifth anniversary of its United Nations membership this year and still believed in the ideals and purposes of the Charter.  Twenty years ago, Malta had put the issue of climate change on the political agenda at the United Nations and today it was “one of the principal critical issues dominating the international environmental concerns of this new century”.  Malta’s commitment to the issue was as strong as ever, and he urged other countries to work for the success of the upcoming Copenhagen Conference.

Concerning work to be undertaken by the Organization, he proposed the drafting of a declaration on human duties and responsibilities, which would include the task of conserving the human species and preserving the environment.  “ Malta believes that human duties are intrinsic to the personality, oneness and uniqueness of the human being, and are as inalienable as human rights,” he said.  “Those duties do not arise from laws or obligations but are fundamentally inherent to the human being.”  In terms of the Organization’s diplomacy and peacekeeping support, he said the Middle East continued to “evade our long-sought efforts”, and reiterated Malta’s long-time support for two States, Palestine and Israel, in peaceful coexistence.

As for the question of illegal immigrants, an issue he had raised last year as well, he said Malta continued to honour its international obligations, although the small country was experiencing severe difficulties as a result of the influx.  “ Malta has always dealt with these situations with great responsibility, humanity and benevolence, paying due respect to every human being without exception, and we will continue to do so,” he said.  “At the same time, the problem of illegal immigration is an international phenomenon driven by external factors, which cannot always be prevented or even mitigated by the countries affected by this problem.”  He encouraged the United Nations to address issue affecting Malta and other Mediterranean countries disproportionately and in an unprecedented manner.