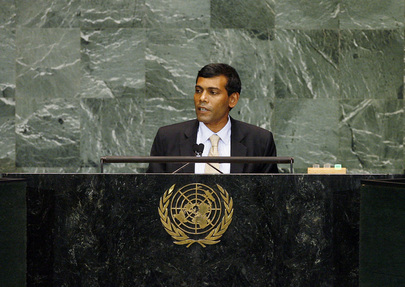 MOHAMED NASHEED, President of the Maldives, said it was the first time a democratically elected President of the Maldives had addressed the Assembly.  “I am extremely pleased to be here,” he said, noting that he had spent many of the past Assembly sessions locked in a hot, humid, damp cell with his hands shackled and feet bound; imprisoned for his conviction that that the 300,000 people of the Maldives should be free from fear, free from want and free to live their lives in liberty and in dignity.

The second area where Maldives sought assistance was in dealing with the economic challenges currently facing the country.  His Government had begun major economic reform to reduce the sizable public sector, to privatize public utilities and to promote private enterprise and trade.  The International Monetary Fund (IMF) and the Indian Government had already extended support to the Maldives.  But the country could not succeed without more help, he said.

The final challenge concerned climate change, a threat so serious that there could come a time, he said, “when we must consider abandoning our homeland”.  He urged the leaders in the Assembly to reach an ambitious and effective agreement in Copenhagen this December.  “To do otherwise would be to sign the death warrant for the 300,000 Maldivians,” he said.  With regard to such threats as terrorism, he said that Maldives stood shoulder to shoulder with all countries in facing down that menace.  He nevertheless warned that the past year’s events in Afghanistan, Pakistan and India showed that the fight was not easily won.

On the work of United Nations, he said proposed organizational reforms would be unsuccessful and incomplete if the Security Council was not restructured as well.  He called on the Assembly to complete the task and enlarge the membership of that 15-member body, both in terms of permanent and non-permanent seats, during the current session.  He added that his Government wanted friendly and mutually respectful relations, characterized by frank exchange, with all countries represented at the Assembly.

With regard to international relations, he said his country wanted to renew its relations with Israel and supported an independent and sovereign Palestinian homeland, in conformity with the relevant United Nations Security Council resolutions.  He praised the courage of Aung Sang Suu Kyi of Burma and called for her immediate and unconditional release along with all other political prisoners.  In conclusion, he reiterated the importance of the upcoming Copenhagen climate meeting.  “It is imperative we succeed,” he said.  “If we want to save the world, saving the Maldives, I suggest, is a very good staring point.”