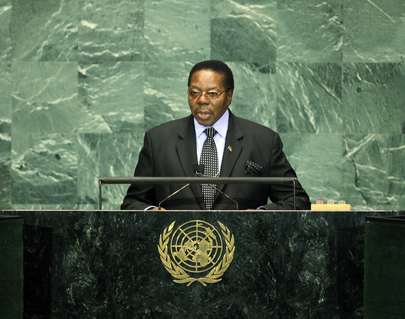 BINGU WA MUTHARIKA, President of Malawi, joined the calls for strengthening multilateralism and dialogue among civilizations to promote peace, security and development as a way to effectively respond to global crises.  He said it was time for world leaders to move closer together and to strengthen collaboration in facing global challenges such as climate change, financial and economic crises, food and energy crises, armed conflict, terrorism and, above all, poverty.

First on the agenda in multilateralism, he said, was to reach consensus on reform of the multilateral institutions, including the United Nations.  Equitable representation of the world’s countries must be achieved and developing nations must have an effective voice on matters concerning them.

Second, he said, world food security must be attained.  Food shortages threatened the foundations of democracy and good governance.  A formula must be developed for world food production at affordable prices.  His own country had moved from a condition of food deficit to a food surplus nation, able to afford export to neighbours.  The success was the result of a strategy in which the Government had allocated large budgetary resources to the agricultural sector and had invested heavily in that area.  Subsidies had also been granted to poor farmers to buy fertilizers, seeds and chemicals at low-cost, so as to make poor smallholder farmers more productive.

Moving on, he said the third item on the agenda for multilateral action was to manage climate change.  His country’s strategy was aimed at intensive irrigation farming and moving away from heavy dependence on a rain-fed agricultural system.  A “Green Belt” programme would irrigate up to a million hectares of land for small-, medium- and large-scale farming.  Food crops would include rice, wheat, maize, beans and lentils.

The final item on the agenda, he said, was the question of what would happen with trade under the Doha framework.  It was of concern that the industrialized countries continued to marginalize Africa, while they continued to protect their industries against African goods.  A fair international trading system could be developed if the G-8 countries were willing to engage in genuine dialogue to solve the problems.  All nations must also take part in global dialogue concerning democracy, good governance, human rights, the rule of law and the fight against terrorism in all its manifestations.  “We live in one world,” he said.  “We have the same destiny.”