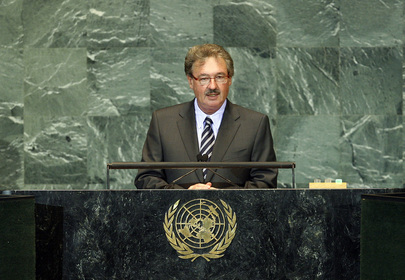 JEAN ASSELBORN, Deputy Prime Minister and Minister of Foreign Affairs of Luxembourg, said the past year had been marked by the worst worldwide financial and economic crisis since the Great Depression, with 50 million workers losing or facing the loss of their jobs, and more than 100 million people sinking into hunger and poverty.  Add the H1N1 Influenza pandemic, the last 12 months could be described as an annus horribilis.  However, there was no better place to take stock, draw lessons and readdress those many global crises than the General Assembly.
Because those events had hit the poorest and most vulnerable hardest, there was a need for a concrete international action plan to engage the responsibilities of both donors and recipients, he said.  In that regard, Luxembourg not only reaffirmed its continuing commitment to devote 0.95 per cent of its gross national income to ODA, but would focus on a target of 1 per cent while insisting on qualitative improvement in its involvement with economic, social and environment issues.  As a lesson of the multidimensional crises, a new architecture must be employed.  As the President of the Economic and Social Council, Luxembourg planned to work towards full implementation of the various mandates put forth by Member States from the framework of the recent Conference on the World Financial Crisis and Economic and Its Impact on Development.
Noting that unilateral tendencies often emerged from times of crisis, he urged Member States to reaffirm the multilateral structures needed to address the issues at hand, and to continue to foster trust among nations.  Current geopolitical realities called for a reformed Security Council, a revitalized General Assembly, a more effective Economic and Social Council and a stronger United Nations.  “It lies in our hands to demonstrate the continued relevance of our Organization, of its capacity to act and to formulate joint responses, global responses and legitimate responses.”
Turning to Middle East issues, he said the Israeli policy of colonization was clearly an obstacle to peace and must cease in order for progress to be made.  He hailed President Obama’s intention to engage in Israeli-Palestinian negotiations, noting that, when alone around a table, such as at Annapolis, Israelis and Palestinians were unable to work towards resolving the complex issues at hand.  Substantial progress had been made on Palestinian support for Palestinian Authority President Mahmoud Abbas, as well as on confidence-building measures by Israel and the Arab countries, among other things.  Still, full implementation of Security Council resolution 1860 (2009) was essential.  “The credibility of the United Nations is at stake,” he said.
Hailing President Obama’s broader discussion on non-proliferation and disarmament in the Security Council, and his commitment to work towards ratification of the Comprehensive Nuclear-Test-Ban Treaty, he remarked that the United States decision to discontinue its the missile defence shield marked efforts to engage in dialogue with involved parties rather than in unilateral measures.  As for climate change, Luxembourg was committed, with its European Union partners, to its goal of “20-20-20”, which aimed to increase energy efficiency in the regional bloc 20 per cent, increase the share of renewals of final energy consumption by 20 per cent and reduce greenhouse gas emissions by 20 per cent.  Disarmament efforts would free up financial resources that could be redirected to financing climate change adaptation efforts.