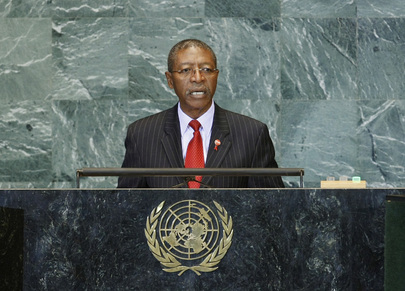 PAKALITHA B. MOSISILI, Prime Minister of Lesotho, opened by saying that the United Nations was meeting at a time of serious challenges that included the financial crisis, climate change, and threats to international security and peace.  A multilateral and effective response was needed to deal with those issues.

Turning to the economic crisis, he said that the least developed and developing countries were hardest-hit and that it seemed “obvious that Governments can no longer abdicate to the financial institutions their responsibility of oversight and regulation of the global financial systems”.  He pointed to the impact of the crisis on his country, as well as on all poorer countries, which faced a serious reduction in exports and a choking of capital flows.  Lesotho’s textile exports had dropped dramatically, resulting in unprecedented loss of livelihoods and an erosion of the gains made towards poverty eradication.  The impact was “felt in all aspects of life; be it the increase of unemployment, illiteracy or in the incidence of HIV and AIDS-related deaths due to the unavailability of drugs”.

He said he was heartened, however, by the efforts of the G-20, which had pledged a stimulus package of $1.1 trillion, much of which was slated to go to developing countries.  But he was concerned that the initiative seemed to have stalled, and it was unclear how the funds would be distributed.  He urged that the disbursement be free of quotas and conditionalities, and that it would be mindful of the needs of individual countries.

Regarding climate change, he said that was something “we are beyond the capacity of any individual country to deal with alone”.  The response to its impacts must be a top priority for all, and it must never be forgotten that, at the forefront of those most affected, were the poor and innocent.

Turning to security issues, particularly the situation in Rwanda, he said that, while there had been healing, the “Rwanda genocide is still fresh in our minds”.  He reminded Governments of their obligation to protect their people from mass atrocities, including genocide, ethnic cleansing and war crimes, reaffirming support of the principle of the responsibility to protect.  The resolve must be to never fail any population again.  The responsibility to protect notion was closely linked to reform of the United Nations, and especially to that of the Security Council, which lacked legitimacy and did not truly reflect the current United Nations Membership.  Therefore, its composition was “irrelevant and undemocratic”.

He meanwhile urged the international community to strive for a world free of nuclear weapons, expressing disappointment that some countries were still testing nuclear weapons.  Their “continuing possession and development of nuclear weapons cast doubts on whether this objective can indeed be realized”.  At the same time, however, he reiterated the right of every country to develop and use nuclear technology for peaceful purposes, which could benefit all humanity.

He touched on other several issues, and called for universal support of the International Criminal Court.  There was also a need to tackle the problem of piracy off the Somali coast, which negatively affected maritime security overall.

He next turned to the plight of the peoples of Palestine, the Saharawi Arab Democratic Republic and Cuba.  He called on Israel to cease settlement activities and for both sides in that conflict to halt the use of force; for the decolonization and right of self-determination of the Saharawi people; and an end to the United States embargo on Cuba.