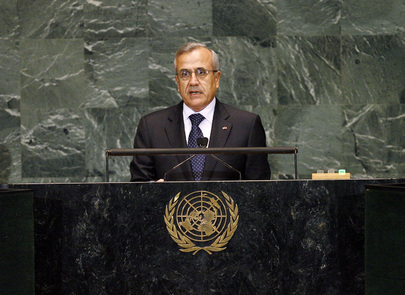 MICHEL SLEIMAN, President of Lebanon, began his statement by expressing hope that his country would be elected to a non-permanent seat on the Security Council for 2010-2011.  Lebanon approached that election with “great confidence”, as the country had been a founding Member of the Organization and had significantly contributed to the Universal Declaration of Human Rights.  He reaffirmed Lebanon’s willingness to participate in the Security Council and to the resolutions of international legitimacy, especially those which aim to ensure peace in the Middle East.
However, the Middle East had become a place of tensions, conflicts and wars.  He urged that Middle East peace should be achieved on a “pre-determined and integrated scheme”, with basic elements that had been mapped out in resolutions of international legitimacy, such as the Madrid Peace Conference and the Arab Peace Initiative.  The key to peace was political will, but the Israeli side lacked it.  He added that “Israeli threats of attacks and wars persist as a means to impose control and hegemony, as well as to impose a fait accompli.”
Thus, he urged the international community to resort to appropriate means of pressure to compel Israel to fulfil its international obligations towards the peace process.  If not, he wondered how the wider region could convince its peoples that the international community was capable of achieving a just and comprehensive peace, including Israel’s withdrawal from all occupied Arab territories.  He noted that people have a right to retrieve their occupied territories “through all legitimate and available means, in accordance with the provisions of the Charter of the United Nations and its relevant resolutions.”
Then, he turned to the issue of Palestinian refugees and noted that addressing that situation required a political solution and that the Palestinians could not be denied their natural right of return to their homes and lands.  That position was in accordance with the Constitution and national pact of Lebanon.  “Let it be known that such a position will neither be compromised nor reversed,” he said, expressing his gratitude to the countries that supported that position.
Turning inward, he noted Lebanon’s accomplishments:  maintenance of internal stability, dismantling “Israeli spying networks” and terrorist cells, while striving to implement Security Council resolution 1701 (2006).  Lebanon had also reinforced bilateral relations with friendly countries, and had recently carried out transparent parliamentary elections.  Lebanon was looking forward to forming a national unity government “very soon”, in the hopes of launching the political, administrative and judicial reform processes in line with the wishes of its people.
He was resolute in the fact that Lebanon had been able to boost its credibility, avoid the aftermath of the global financial crisis and raise its growth rate to almost 6 per cent and attract tourism and investment.  He ended by recalling the situation in the Middle East, and expressing hope that the United Nations, which was originally established to prevent wars and resolve conflicts through peaceful means, would continue to work “through the active and unbiased international efforts”.