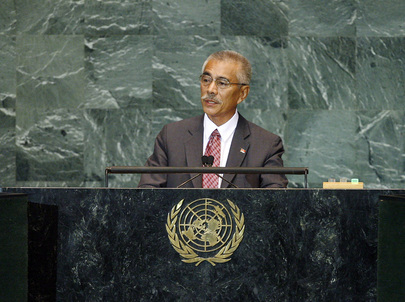 ANOTE TONG, President of Kiribati, declared that climate change was the greatest moral challenge of our time, and the world could not afford the consequences of inaction.  The people of his country were already feeling the impacts of climate change, which he said would only worsen with time.  “We, together with those of other low-lying States, are the human face of climate change.”
He advocated pragmatic adaptation strategies, and stressed that it was the Government’s desire to “maintain our homeland and our sovereignty”.  However, with the island’s ever-shrinking ability to support life, its growing population and rising sea levels, the Government also wanted to provide opportunities for those who wished to migrate to do so, on merit and with dignity.  While calling for assistance with adaptation measures, he also asked those nations that might need his country’s labour to open their doors.
Urging international support for relocation strategies, he referred to strategies, in cooperation with New Zealand and Australia, such as the Kiribati Australia Nursing Initiative and the Australia Pacific Technical College, which he believed could be implemented more broadly and could become win-win options for all concerned.
Turning to the international community’s work on climate change, he said it would be important to reach consensus in Copenhagen, and asked:  “If we can mobilize trillions of dollars to address the challenges to the global economy, then we are capable of taking the actions necessary to deal with the challenges of the global environment.”  The key was to capitalize on collective political will, he said urging delegations not to waste time on “diplomatic-speak, posturing and empty platitudes”.
He said that everyone knew what needed to be done and stressed that the Copenhagen summit provided an opportunity to enter into a global compact for action on climate change –- between developed and developing; North and South; East and West.  “This is perhaps our last chance.  If we do not act now, who will?”
Moving on to graduating from least developed country status, he said Kiribati’s vulnerability as a small island developing State should be taken into account when considering it for such graduation.  Indeed, losing the international assistance provided the least developed countries would be detrimental to Kiribati’s development efforts.