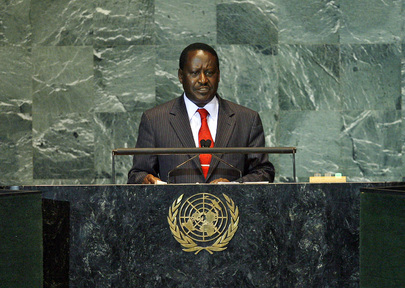 RAILA AMOLLO ODINGA, Prime Minister of Kenya, said it was encouraging that the world was turning to the United Nations to find a common global path to resolving the most intractable challenges.  A clear recognition was emerging that “together we can all rise; separately, we can only sink”.  The disdain of the powerful for the Organization’s ability to be a unifying player was changing, thanks to the President of the United States, who held a special place in the hearts of Africans, particularly Kenyans.  The need to reform the United Nations so it could better meet its challenges must be pressed forward, he said, adding that enlargement of the Security Council must include permanent, veto-bearing seats for Africa.  The world could no longer continue to marginalize a continent that was home to nearly a billion people, if sustainable solutions to challenges were to be devised.
The world was now acutely aware that the quest for peace began with ensuring survival of the planet, he said.  Since little progress had been made in producing a more coherent institutional framework for international environmental governance since the 2005 World Summit, the Nairobi-based United Nations Environment Programme (UNEP) should be upgraded to the same level as the Organization’s Geneva and Vienna Offices.  It should serve as the central institution in charge of the numerous environment-related conventions, since the emergence of multiple centres only dissipated the impact of “green” efforts.
Reviewing his country’s environmental challenges and measures undertaken to address them, he highlighted the restoration of water towers, a huge reforestation drive to plant 7 billion trees and a crash programme to rapidly shift energy production to green technologies.  Kenya needed assistance with a drought that just last week had been declared a national disaster, with 10 million Kenyans possibly facing starvation soon.  Addressing that situation would require $500 million, half to be mobilized domestically and the other half from donor partners.  A massive mobilization was already under way, including through the use of the military, to provide relief, drill boreholes and transport water to areas in acute need.
Turning to other matters, he said his country’s terrible post-election violence had made reconciliation and reconstruction harder, but the people had shown resilience in rising to unprecedented challenges.  The election-era bitterness had been resolved through an accord signed with the help of the African Union, mediation by former United Nations Secretary-General Kofi Annan and a personal visit by the Organization’s current Secretary-General at the height of the crisis.  However, one area where peace did not prevail was in Kenya’s neighbour, Somalia, which was of concern to the entire international community.
Efforts to defeat the forces of extremism in that country were hampered by the help they received from external elements.  A major source of insecurity in Kenya was the resulting inflow of refugees, small arms and light weapons.  The latest additional source was the disruption of international trade through piracy in one of the world’s busiest sea routes.  Kenya had offered facilities for dealing with suspected pirates and was ready to host a United Nations conference on coordinating efforts to deal with the phenomenon.  The international community should recognize that the use of force could not curb extremism, and encouraged Somalia’s Transitional Federal Government to more aggressively pursue its commitment to a much more inclusive political process.