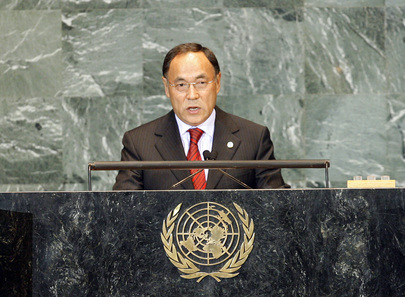 KANAT SAUDABAYEV, Secretary of State and Foreign Minister of Kazakhstan, recalled that on 11 September eight years ago, Kazakh citizen Zhanetta Tsoy had kissed her husband and daughter goodbye before perishing on her first day of work, in the attack on the World Trade Center.  That terrorist act, and the world’s unity in condemning it, showed that only together could the international community make a safer and better present and future.  Kazakhstan had supported the global fight against terrorism from the start by assisting the efforts of the international coalition in Afghanistan.  However, there had never been and there would never be a purely military solution to the conflict there.
Noting with satisfaction the increased attention paid by coalition members to non-military aspects of security, he said his country was assisting, to the best of its ability, in the international efforts to rehabilitate Afghanistan.  Kazakhstan was also in the process of developing a long-term educational programme for training qualified Afghan specialists.  However, the country’s long-term stability was impossible without effective measures to tackle illicit drug trafficking.  The Central Asian Regional Information Coordination Centre had been established in Almaty, Kazakhstan, with United Nations support, to fight illicit drug trafficking.  As Chairman-in-Office of the Organization for Security and Cooperation in Europe (OSCE) in 2010, Kazakhstan intended to define stabilization efforts in Afghanistan as one of that organization’s most important priorities.
As a country that had experience the horrors of nuclear tests, Kazakhstan had a “moral right” to call for more decisive action in the area of disarmament, he said, calling in particular for the soonest possible entry into force of the Comprehensive Nuclear-Test-Ban Treaty.  However, the Treaty on Non-Proliferation of Nuclear Weapons was “asymmetrical” in providing sanctions only against non-nuclear-weapon States.  Nuclear-weapon Powers should themselves set the example by reducing and renouncing their nuclear arsenals.  An effective measure to strengthen the non-proliferation regime would be the establishment of an international nuclear fuel bank under IAEA auspices, which Kazakhstan would be willing to host on its territory.
Calling attention to Kazakhstan’s proposal to declare 29 August the International Day for a World Free of Nuclear Weapons, he said that was the date of the first Soviet nuclear test conducted at Semipalatinsk in 1949 and the date when the site had been shut down in 1991.  As Chairman of the 2011 Ministerial Conference of the Organization of Islamic Conference (OIC), Kazakhstan was eager to use that “unique opportunity” to strengthen constructive cooperation between various cultures and civilizations, and to adopt concrete decisions on the issue.  Quoting Martin Luther King Jr., he said: “Men often hate each other because they fear each other; they fear each other because they don’t know each other; they don’t know each other because they cannot communicate; they cannot communicate because they are separated.”  While those words were often true today, they should not be true tomorrow.