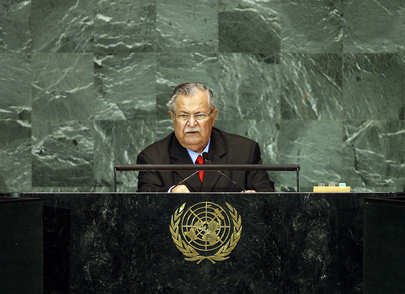 JALAL TALABANI, President of Iraq, said that there had been significant improvements in his country over the last year.  The Government had assumed added responsibility for the country’s security, and had reached an agreement with the United States on the withdrawal of troops from Iraq.  As the Iraqi Government had worked towards national dialogue and reconciliation, while simultaneously confronting terrorist groups, armed militias and outlaws, security in Iraq had improved, he said.

He went on to say that Iraq’s external relations had also improved and there had been high-level international visits to the country as well as the reopening of foreign embassies in Baghdad.  The Iraqi Government would continue to deepen its friendship, cooperation and good neighbourliness, so as to restore its role in the Arab, regional and international community, in a manner that strengthened security and stability in the region, he added.

With regard to the economy, he said Iraq had passed a set of laws that contributed to greater progress and prosperity in Iraq, and the country’s 2009 budget was ambitious.  Because the security situation and financial outlook had improved, a significant number of displaced Iraqis had returned home voluntarily.  The Government was encouraging such returns, and he called on other States and international organizations to promote “a culture of voluntary return”, because, he said, “ Iraq needs the expertise of all Iraqis to contribute in building the future of their country”.

Concerning the upcoming legislative elections scheduled for January 2010, he said that exercise would strengthen the building of national institutions and put the country on the right path towards security and stability, which, in turn, would be a key factor in furthering security and stability in the region.  Challenges, however, remained.  The real danger faced by Iraq was outside interference, he said.  Iraq had recently witnessed a series of bombings and terrorist attacks, the last of which -- the “bloody Wednesday” explosions in August -- had targeted the Iraqi Ministries of Foreign Affairs and Finance, and had claimed many innocent victims.

Those criminal acts, and the number of victims claimed in the attacks, had escalated to “the level of genocide”.  Such terrorist attacks qualified as crimes against humanity and should be subject to punishment under international law, he said.  “We believe these acts […] cannot be planned, funded and implemented without the support of external forces,” he said.  As a consequence, his Government had put the matter in front of the Secretary-General with a request that it be submitted to the Security Council so that an independent international investigative committee could be formed.  Those found guilty should be sentenced by a special international criminal court, he said.

On the subject of various Security Council resolutions, he said his Government had inherited a number of financial problems and difficult commitments from the previous regime, and the Iraqi people were paying the price.  He therefore called on the Council to terminate any resolutions issued under Chapter VII, affecting the sovereignty of his country.  He went on to praise the positive role of the United Nations Assistance Mission for Iraq (UNAMI) and encouraged United Nations agencies and institutions to intensify their presence in Iraq and to reopen their Baghdad offices.