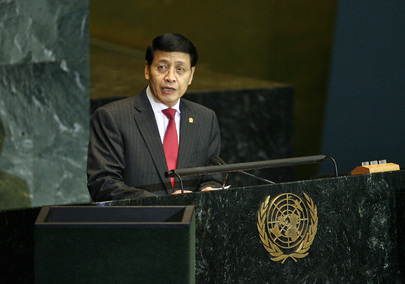 HASSAN WIRAJUDA, Minister for Foreign Affairs of Indonesia , said the Assembly was meeting amid intertwined crises, the most urgent of which was the current economic and financial turmoil, which had put millions out of work and pushed more than 100 million people below the poverty line.  “No more will we depend on just a few industrialized nations to solve the world’s economic problems,” he said, adding that, through the G-20, the developing world would be heard in international decision-making.  Indeed, the world was building a new and constructive “power equation”, whose distribution of influence should be replicated in other bodies, including the Security Council.
Also, financial institutions and instruments would need to be regulated, and Indonesia was working within the G-20 to reform the International Monetary Fund (IMF) and multilateral development banks, which must deliver concessional financing without conditions to low-income countries.  He said that such efforts had set refreshing precedents in terms of access to financial resources and transparency.  Climate change, and food and energy security were problems that fed on one another, and they had come about through a failure to form an effective international partnership to address a large bundle of challenges.
At its root, the current international situation had been set in motion by a failure of multilateralism.  That failure could be rectified, he said, notably in Copenhagen this December, as States came together to reach consensus on a new climate accord.  As the host country to the 2007 Bali Conference on Climate Change, Indonesia fervently hoped the upcoming meeting would yield a new framework to strengthen the Kyoto Protocol.  That framework must stipulate deep emissions cuts, financing for adaptation and mitigation, and a priority role for forests.  In that context, he noted the Indonesia Forest Carbon Partnership.
Turning to food security, he said Indonesia’s investment in agriculture had led to a surplus in rice production, to be allotted for both buffering national stocks and contributing to global food security.  Through similar reform, a global partnership for energy security had a better chance of making a technology breakthrough that would increase fuel-burning efficiencies.  With a new spirit of multilateralism, the impasse in the Doha Round of world trade talks could be broken in 2010, and protectionist barriers –- rising again amid fears sparked by the economic crisis –- torn down.  Such efforts should also bring about the fulfilment of the 2002 Monterrey Consensus.
In addition, he said there was no reason why that spirit of reform could not resuscitate the disarmament agenda.  In a truly democratic world order, nuclear Powers would live by their commitment to the Non-Proliferation Treaty by slashing arsenals and abiding by the Comprehensive Nuclear-Test-Ban Treaty.  In turn, non‑nuclear countries would continue to refrain from building nuclear weapons.  A window of opportunity had been opened with the adoption of Security Council resolution 1887 (2009) and process between the United States and the Russian Federation to cut arsenals.
Regarding United Nations reform, he called the Security Council a “throwback to the world at the end of the Second World War” paralysed by an undemocratic composition and veto system that could no longer guarantee collective security.  The 15-member body had to become more democratic, transparent and accountable.   Indonesia was a great believer in democratic reform, which had saved the country from being totally crushed by the 1997 Asian financial crisis.
Continuing, he said Indonesia had transitioned from a highly centralized, authoritarian regime to a decentralized, fully democratic system, and since 2004, had fine-tuned its reforms.  A second wave of reform would allow it to become a developed nation by 2025.  As the world’s third-largest democracy, Indonesia hoped that the world, as it reformed economic governance, would understand that “prosperity without democracy is but a bubble”, and that democracy that did not deliver development would not endure.