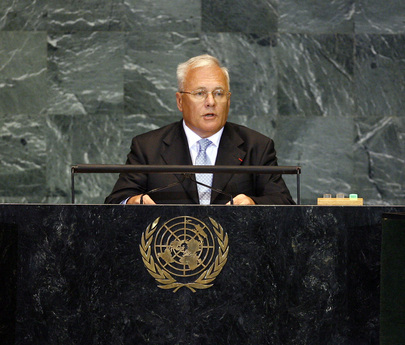 PETER BALAZS, Minister for Foreign Affairs of Hungary, said his country had especially been hard hit by the downturn of the world economy, but the Government had responded by implementing a number of stabilization measures that were already resulting in positive trends.  Global crises required all to act together in the spirit of shared responsibility.  All nations shared the responsibility to develop and maintain sufficiently flexible international arrangements capable of responding to modern challenges.  Besides desperately needed stimulus measures in developed and developing countries, he said urgent issues such as ensuring increased food and energy security should also be addressed.
He said climate change threatened the very foundations of life.  A comprehensive strategy was needed to face all dimensions of that phenomenon, and actions should be considered as an opportunity to achieve prosperity and growth, not an additional burden.  Preventing conflicts also remained high on the agenda and the United Nations, in cooperation with regional organizations, continued to play a key role to that end.  International efforts in Kosovo were a good example of effective cooperation among stakeholders such as the European Union and the North Atlantic Treaty Organization (NATO).  Full integration of the Western Balkans into the European and Euro-Atlantic structures was a means to promote stability and prosperity in the region.
A peaceful and lasting solution to the conflict in Georgia must be based on full respect for the independence, sovereignty and territorial integrity of the country.  He deplored the decision that had led to the termination of monitoring activities of the United Nations and the Organization for Security and Cooperation in Europe (OSCE) in parts of Georgia.  The resumption of international presence there was necessary.  He went on to say that Iran’s nuclear programme continued to be a matter of most serious concern, and urged Iran to engage in substantive negotiations on its nuclear programme without further delay.
He said the promotion and protection of human rights, including the rights of national minorities, was high on the Hungarian agenda.  The Government attached great importance to the work of the United Nations Minority Forum, as some “alarming tendencies” had a detrimental effect on the political participation, cultural life and education opportunities of minorities.  As a new member of the Human Rights Council, Hungary had prepared a feasibility study on the establishment of the Budapest Centre for the International Prevention of Genocide and Mass Atrocities.  He strongly supported efforts to strengthen the United Nations’ ability to adapt to new realities.