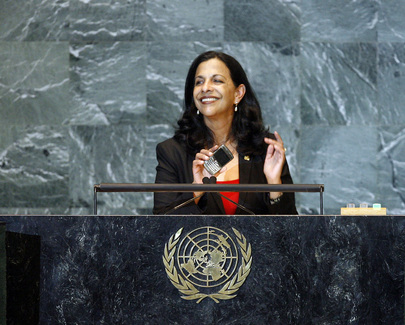 PARTICIA RODAS BACA, Minister for Foreign affairs of Honduras, said three years ago, Manuel Zalaya, the President of her country, had come to propose honest, easy solutions to respond to the major challenges faced by society, and to diminish terrible differences between the rich and the poor.  He had fought for the rights of migrants and the forgotten, she said.  With simple and effective proposals, President Zalaya had constantly called for a fairer world that would lighten the burden of shame on the poor and the misery of the many.
She said the President had also called for a world of tolerance, mutual respect and cooperation in order to build a better world.  Criminal hoards, she said, had forced Honduras back to an issue it thought had been relegated to the past.  She said that while she was speaking, the President was being held “under siege” by military forces.  He was being menaced and everyone was holding their breath as the life of the President and the people was in peril, she warned.
She held up her cell phone to the microphone so President Zelaya could address the Assembly via telephone from the Brazilin embassy in Tegucigalpa, the Honduran capital, where he has been holed up for just over a week.  Mr. Zelay said he wanted to dispel any doubts as to whether or not his country had been gripped by a dictatorship.  He said he had been subjected to a coup d’état, one that had oppressed the rights of the people.  When the people had been silenced, a serious crime had taken place.
Nonetheless, he called for the rule of law to be restored and for civilized nations of the world to receive support to maintain a stand against barbarism.  He called for the United Nations to help restore the freedom and rule of law Honduras deserved.  He saluted the courage of Brazil’s President Luiz Inácio Lula da Silva to uphold the need for democracy, and called on the United Nations to reverse the coup and to ensure that all countries had the right to democracy.
As the President was being “threatened” while taking refuge at the Brazilian embassy, Ms. Rodas Boca said she had come to report on the terrible impact of the resulting recession on the people.  Describing the severity of tensions in the country, she said passage through airports had been closed, news and media networks had been dismantled and that a “state of siege” had been declared, rendering the constitution null and void.
There had also been reports of women being raped during protests, she said, likening Honduras to an enormous growing prison and a concentration camp, adding that the entire Central American country had become militarized and taken over by dangerous mercenaries.  Recalling her country’s history of strife, she said that it had fought against conquest, colonization and economic differences.  Now Honduras was continuing to fight peacefully, for freedom and self-determination, with only the truth as its weapon, three months to the day it had been robbed of its Constitution.
She went on to stress that “no matter how small we are, we deserve no less than any other society”.  Hailing the heroic acts of everyday Hondurans, who had worked and walked tirelessly and peacefully for days, she was certain that the unwavering support of the international community would make it possible for them to reclaim their democratic path.  “They put their feet firmly to the ground, on the soil that gave birth to them”, she said, praising the people’s non-violent mediation efforts to find solutions to the crisis.
Turning to ways to resolve the leadership crisis, she called upon the United Nations and the international community to come up with a global proposal to ward off the threat posed by such repressive and oppressive tyrants against the President and the people of Honduras.  She pressed the United Nations to use the force of its authority “to ward off the danger that hovered over Honduras”, one that had gotten closer and become more terrifying, and urged it to set specific dates to assure ultimatums and plans of action for mediation and dialogue for peace.
She called on the Assembly to convene a special session to review the situation as it unfolded, stressing that it was also crucial for the Secretary-General to appoint a special diplomatic mission comprised of numerous Member States to go to Honduras immediately and assess the situation on the ground.  A state of siege with no citizens’ rights was not conducive for free and transparent elections, she affirmed.  She urged the international community to continue to monitor the day-to-day situation of violence and potential breaches of the Geneva Conventions, especially with regard to violations of the right to immunity.