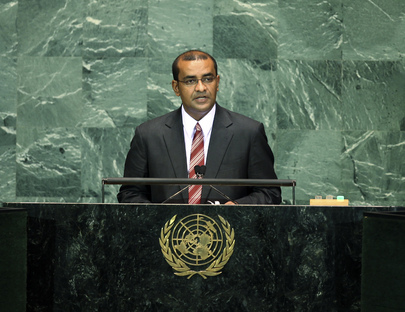 BHARRAT JAGDEO, President of Guyana, said the world was “beset by historical challenges”, and lauded the theme of this year’s General Assembly, which was to deal more effectively with global crises.  Recent history was replete with examples of crises that have been addressed only to recur with greater severity.  Thus, he urged the international community to learn the lessons of the past.

He stressed that nowhere was such deleterious repetitiveness more evident than in the global economy, which had “catapulted from one calamity to another in recent years, each more severe and pervasive than the previous”, each successively disclosing new vulnerabilities in the global financial architecture.

He addressed the “peculiar vulnerabilities” of the Caribbean countries which included minute domestic markets, remote geographies, susceptibility to natural disasters and few opportunities for diversification.  Specifically, he cited the depressed tourism market and lowered prices of primary commodities, such as bauxite, which had led to a decline in export and foreign currency earnings.

He noted that last year he had called for a new Bretton Woods architecture, yet he now feared that in spite of that discussion, the concerns of small countries would not be reflected, despite their obvious need.  He urged the international community to relieve, support and restructure the debt of all heavily indebted small countries, and called for bilateral and multilateral partners to provide additional development assistance.

Turning to the issue of climate change, he urged the global community to “shape a solution that is in all our interests”, stressing that many of the building blocks that would lead to such a solution were already in place.  The challenge for the upcoming Copenhagen meeting on climate change would be to turn these building blocks into an agreement.

The agreement should be guided by science and by a need to treat all countries fairly, he continued, adding that Guyana and other developing countries were concerned whether the wider international community would commit to the scale of financial transfers that all major analyses agreed was needed.  On the other hand, he understood that many developed countries were worried that the financial outlays would be an excessive burden on their own budgets during the current challenging financial times.

However, he said, political concerns could be a recipe for a stalemate that the world could not afford, and leadership would be required from all nations.  He welcomed the proposals laid out by Prime Minister Gordon Brown of the United Kingdom, and supported by the European Union, to generate funding of $100 billion per year to address climate change in the developing world.

He said that he was confident that with the right signal from the developed world, developing countries were ready to play their part, adding that Guyana had launched its Low-Carbon Development Strategy, which would place its entire forest under long-term protection to not only provide the world with climate services, but move its economy onto a long-term, sustainable, low-carbon development path.