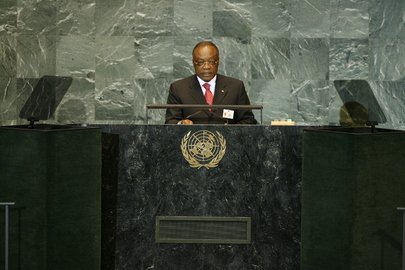 PAUL TOUNGUI, Minister for Foreign Affairs, Cooperation, la Francophonie and Regional Integration of Gabon, noted that his country had just undergone a critical phase with the loss of President Omar Bongo Ondimba on 8 June and the opening of a delicate transition period.  Under the interim presidency of Rose Francine Rogombe, Gabon had held a vote on 30 August.  Ali Bongo Ondimba had been proclaimed elected by the constitutional court, which had one month to review any appeals against his election.  In that context, he noted the importance of the democratic transition and expressed pride that it had been conducted in a manner that was mindful of what was at stake.
Thanking all those who had come to observe the elections, he said that as Gabon opened a new page in its march towards progress and development, the country understood it could rely on the international community and its friends throughout the world to help it take up various challenges.  The Government would spare no effort to ensure good political and economic governance and consolidate gains in peace and democracy.  Gabon was motivated to maintain regional and global peace, particularly by strengthening its relations with its neighbours.
Noting that the Assembly’s sixty-fourth session had opened deliberations in the context of crises in finance, food, energy and the environment, he called on delegates to provide solutions by acting collectively.  The United Nations Conference on the Global Financial and Economic Crisis marked an important step in solidifying commitments in the struggle to combat the repercussions of the crises.  “We must ensure that actions taken to address problems are proportional to their gravity,” he declared.
Regarding the food crisis, he said important statements had been made at the 2008 World Food Security Conference and it was time to implement them.  In addition, the challenge of feeding a growing planet was linked to climate change and he was pleased that world leaders would discuss that connection in Copenhagen this December.  Gabon, whose forests were in the Congo Basin, had fought against climate change and would allocate 11 per cent of its territory to humanity by creating 13 national parks.
On international peace and security, he said Gabon had submitted its candidacy for a non-permanent seat on the Security Council in 2010-2011, a proposal endorsed by the African Union Summit held in Sirte, Libya, in July.  Indeed, the Council must evolve to allow the Organization as a whole to adapt to the new international context.  The 2005 World Summit Outcome reaffirmed the need to reform the Organization and, in that context, Gabon welcomed the progress made in implementing its important recommendations.  The creation of a more just world that was responsive to people’s profound aspirations depended on it.