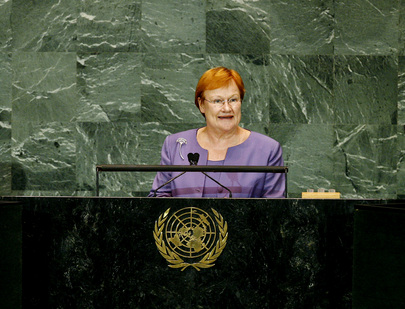 TARJA HALONEN, President of Finland, called the upcoming Copenhagen Climate Change Conference a “real possibility for change”.  The responsibility to take the decisions that would profoundly shape the future of humankind lay with industrialized countries and emerging economies alike.  A global climate agreement was a precondition for comprehensive sustainable development, and it must include elements of solidarity and international support in coping with the needs of adaptation.  Although women were especially affected by climate change, they were also powerful actors in combating it, and their full participation in the negotiations and in implementation of the new agreement must be ensured.

Gender, food production and climate change were all interlinked, she said, pointing out that 70 per cent of the world’s poor were women and girls.  Women also made up the majority of agricultural labourers, and close attention should be paid to their role, especially in the least developed countries.  The negative impacts on small island developing States were also particularly grave as those countries were threatened by rising seal levels and extreme weather conditions.  It was time for the international community to demonstrate its resolve to live up to commitments made in 2000 to attain the Millennium Development Goals, and their reiteration at the 2005 World Summit, even in the face of a contracting world economy.

Turning to the financial and economic crisis, she said a solution should be based on the concept of fair globalization and address the goal of decent work for all.  The “tectonic plates” of the world economy were moving, new actors were emerging and a new global consensus was required on business ethics, integrity and sustainable economic growth.  Trust in international financial institutions must also be restored.  They must be more transparent, accountable and sustainable.

Calling attention to Africa’s continuing suffering and needs, she noted, however, that there had been positive developments, including a decline in the number of conflicts on the continent, and the commitment by the African Union to strengthen its conflict-prevention capacity.  As for other current conflicts, the latest developments in the Middle East were a cause for “careful optimism”.  The broadening consensus could activate the peace process soon.

She said implementation of Security Council resolutions 1325 (2000) and 1820 (2000) on women, peace and security was urgently needed in all countries.  As a follow-up to the International Colloquium on Women’s Empowerment, Leadership, Development, International Peace and Security of last March, Finland and Liberia had convened a sideline event at Headquarters today, titled “Peace and Security through Women’s Leadership: Acting on 1325 and Climate Change”.  It focused on integrating gender aspects into the new climate agreement.

Systematic rape and sexual violence, as condemned in Security Council resolution 1820 (2008), must be treated as a forbidden weapon of war and legal processes must be provided to victims while their attackers were prosecuted, she stressed.  The appointment of a Special Representative of the Secretary-General on Women and Armed Conflict would enhance the implementation of resolutions 1325 (2000) and 1820 (2008), she said, calling on the General Assembly to support that proposal.  As for this morning’s Security Council debate on nuclear issues, she welcomed the strong return of disarmament to the international agenda and expressed hope that it would lead to real progress.