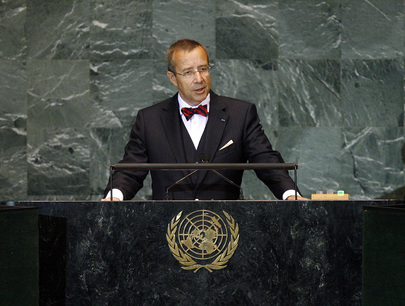 TOOMAS HENDRIK ILVES, President of Estonia, said that even if the financial crisis was connected to issues of peace, security, human rights and development, it should not be allowed to overshadow all other global challenges.  At the same time, however, while the world economy seemed to have stabilized, the crisis was not over, and there was still a need to restore confidence and repair the financial system, he said.
On the subject of climate change, he thanked the Secretary-General for hosting the Climate Change Summit earlier in the week, which had finally brought home to all Member States the magnitude of the task ahead.  “Time is running out,” he said, adding:  “Melting glaciers, frequent and abnormally large hurricanes, floods and heat waves –- this is not the planet Earth we want to leave to our children.”  He called for binding goals to be set at the Copenhagen Climate Summit, and underscored that the “polluter pays” principle would have the greatest effect.
Regarding international security, he reiterated his country’s support for Georgia and its independence, sovereignty and territorial integrity.  Next, he expressed concern about the situation in Afghanistan and noted that Estonia was one of the countries that had steadily increased military and civilian contributions to that country.  Finally, on that issue he warned about new challenges, such as the increasing number of cyber attacks, which endangered vital information technology systems, as well as whole communities, and called for the creation of a universal cyber culture –- “a universally accessible, secure and safe environment for all”.
Turning to humanitarian affairs, he said the international community must provide a more predictable, equitable and consistently effective response to complex emergencies, an effort that required more assistance and better coordination.  While many countries had suffered due to the global financial crisis, it was important to keep up commitments to humanitarian relief.  “Today’s short-sighted financial decisions or fading political will may, in the end, become much more expensive and entail severe long-term consequences.”  He went on to laud the efforts by the Office for the Coordination of Humanitarian Affairs towards more efficiency and coordination, and said that the launch of the Central Emergency Response Fund (CERF) had helped in this regard.
In conclusion, he spoke of the need for reform within the United Nations, particularly regarding the Security Council, and warned that there would be “severe consequences” if the reform process wasn’t completed.  Estonia was a dedicated supporter of United Nations initiatives that fostered gender equality.  The various challenges ahead called for a united response, he said.  “This is why we -– the leaders of all nations -– once again have gathered here this week:  to remind ourselves to keep our eyes on the horizon of peace and prosperity, and to make sure that we are in the same boat.”