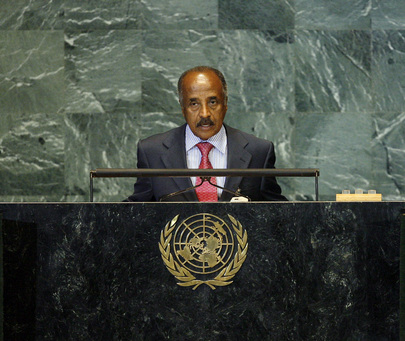 OSMAN MOHAMMED SALEH, Minister for Foreign Affairs of Eritrea, said the United Nations had been founded to address the challenges of the post-World War I and II world order and could not realistically cope with the exigencies of the twenty-first century.  The Organization should have embarked on a process of transformation 20 years ago, when the cold war ended.  The global financial and economic crisis was a mere symptom of the consequences of inaction, and it was clear the ageing world order had been hijacked to serve the interests of the few.
He went on to say that financial institutions had been left to operate unchecked, without restrictions or regulations.  Illegitimate military and coercive blunders had been allowed to fester.  A culture of “politics of fear” and “management by crisis” had been established as a norm.  World peace and security had been imperilled beyond measure.
Moreover, despite the fervent calls for reform by the international community, the few who controlled the outdated world order were not attuned to the notion of change; they had regarded the crises and suffering as ordinary historical imperatives.  In the global maelstrom, none had been more exposed to harm than those of the marginalized in Africa.  The continent had become riddled with crises and conflict.  Special interest groups had rendered the Africans paralysed.  When it came to resolution, Africans found themselves dependent on the goodwill of others.  The role of Africa in the United Nations, as well as in other international organizations, could be described as inconsequential.
The need for fundamental change in the Organization and other international bodies should not be left to the goodwill of the few.  He said the change needed to transform anew the outdated world order should not only be implemented through reform.  The desired change should not only be limited to increasing the number of seats in the Security Council.  It should, rather, steer the world away from its dangerous path of descent, where it was controlled by a powerful few, and redirected towards a path that would ensure the safety of all.  The African continent needed to expend more efforts to achieve that goal, he said, stressing that fundamental reform required collective commitment.
It would not do justice to dwell on numerous current events, or consequences spawned by the fundamental flaws of the world order, he continued.  Doing so would only serve to confuse and distort the bigger picture.  He had, therefore, chosen not to address important issues of the Horn of Africa and Eritrea’s specific issue of illegal occupation of sovereign Eritrean territory, which awaited responsible and urgent action.