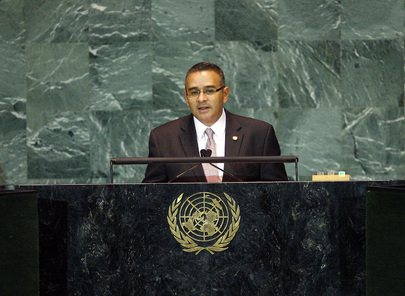 CARLOS MAURICIO FUNES CARTAGENA, President of El Salvador, said that just over three months ago, his country had initiated a process of deepening and strengthening its democracy with a change of Government after two decades of rule by a single political party. The new Government had proposed two overarching objectives with the aim of lifting the country out of its economic crisis and social and cultural backwardness, and moving towards social inclusiveness and a just economic distribution. "Unite, create and include" were the three key words of the new Government.

In less than 100 days, the national unity Government, whose goals were to end societal divisions and create the basis for coexistence in peace and security, had launched a programme for social housing, unprecedented in the country's history, he said, as well as programmes to create some 100,000 jobs. Those and other programmes supported temporary jobs for youth and provided housing. There were also plans to set up the first network of social assistance to aid the poorest urban communities, while programmes for rural communities were already under way. All of that was being done through open dialogue with all segments of society.

Speaking of security, he raised the question of the dangers posed by organized crime, drug trafficking and youth gangs. All methods must be used to combat those scourges, he said. There must be firm and constant domestic policies within all countries in order to fight international organized crime. Only through unity could that fight succeed. He suggested organizing an international conference to address those problems and sought assistance from the United Nations to that end.

Turning to the question of economic migration, he noted that 3 million El Salvadorans working abroad contributed 18 per cent of the country's GDP. That led to the fracturing of families and created wounds difficult to heal. Those emigrants had been denied the right to vote. He had asked political parties, universities and judges to create a framework that would, among other democratizations, ensure the right to vote to citizens living abroad. He called for a holistic and long-term approach to migration to assess all its causes and effects, and looked forward to discussions on the issue at the Third Global Forum on Migration and Development, being held in Athens.

He sought a foreign policy aimed at strengthening cooperation with all nations, promoting peace, security and sustainable development, respecting sovereignty, the right to self-determination and non-interference in the internal affairs of nations, in accordance with the principles and objectives of United Nations Charter. He spoke of having restored diplomatic relations with Cuba and went on to urge the strengthening of links among Central American countries, looking to the European Union as an example. A first step towards a Central American Union would be a regional summit to advance the principles set out in the Tegucigalpa Protocol.

Among the objectives of such a summit would be the strengthening of democracy in the region, which would help to avoid coup d'états, such as the recent one in Honduras, he said. That must not be allowed to set a precedent. He called for the immediate reinstatement of President Zelaya and the creation of a Government of national of unity, to establish legitimacy.

He expressed deep gratitude for the role played by the United Nations in helping El Salvador from war to peace and on towards democracy and development. He was committed to implementing policies that would promote the Millennium Development Goals and other key United Nations guidelines for the full protection of human rights, and indicated his intention to join all human rights instruments. He further expressed support for reform of the United Nations principal organs, especially in light of the new challenges where social, economic, environmental, and political and security issues were interconnected.

While the international financial crisis affected all countries, it especially affected those that were poor and developing, he said. Noting that international cooperation was essential to those countries, he called upon the industrialized and donor countries to participate in all efforts towards progress, particularly with regard to implementing their commitments made at Monterrey and Doha. He made special note of the need to reform international financial structures and systems. On climate change, he spoke of the need to reach a treaty at the upcoming conference in Copenhagen that would encompass sustainable development.