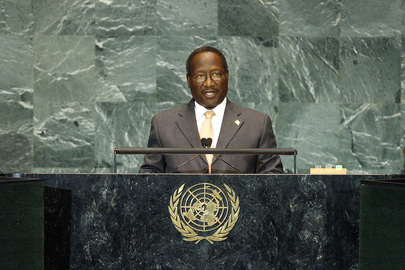 NICHOLAS LIVERPOOL, President of Dominica, said the world was experiencing a period of “unprecedented crises”, which had the potential to bring social and political instability.  “The citizens of the small vulnerable States among us will be the worst hit and, therefore, continue to warrant the special attention of this body”.
He went on to outline regional responses to the crisis, and collaborations under the auspices of the Caribbean Community (CARICOM), but also said that small island developing States and least developed countries still needed practical assistance and financial support from the wider international community.
With regard to the ongoing food crisis, he reminded the Assembly that more than a billion people went to bed hungry every night.  While praising the United Nations System High-level Task Force on Global Food Security as a timely and welcome initiative, and lauding the Group of Eight (G-8) pledge of $15 billion towards food security, he warned, however, that harmful agricultural subsidies in developed countries could curtail the desired objective.
Climate change, he continued, was one of the leading generational challenges.  Dominica supported biodiversity conservation and he announced the country’s intention to become a model for sustainable development.  Further, Dominica was already promoting energy efficiency domestically, and was already generating 40 per cent of its electricity by hydropower.  With further development of geothermal resources, Dominica should be able to reach the target of generating 100 per cent of its electricity through renewable energy by 2015.
Regarding international relations, he voiced concern about the current economic situation in Haiti and called for development assistance to that country to ensure the success of peacebuilding efforts.  Wrapping up, he reiterated his plea for a sound climate agreement to be reached at the upcoming United Nations Climate Change summit in Copenhagen to “protect the inhabitants of this planet, particularly the most vulnerable, from one of the most serious challenges ever to confront humanity”.