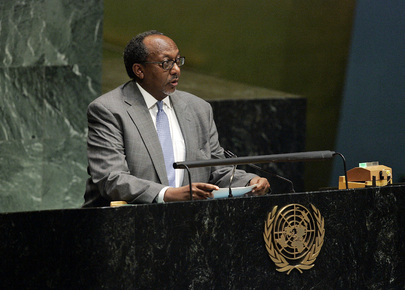 ROBLE OLHAYE ( Djibouti ) said the current financial and economic turmoil had reached the shores of Africa and compounded the continent’s difficulties.  Poor countries had no choice but to work hard to restore growth and recover lost ground in order to reach internationally agreed development goals.  He emphasized that the global crisis could not be an excuse to avoid existing international aid commitments.
Turning to the tense standoff with Eritrean forces in the north of Djibouti, he said the Security Council had consistently condemned Eritrea’s forceful occupation of his country’s territory, Ras Doumeira and Doumeira Island, and in Council resolution 1862 (2009), had demanded, among other things, that Eritrea withdraw it forces and military hardware to locations prior to the standoff.
Eritrea had rejected the resolution and the matter had essentially remained the same, he continued.  The militarization of that key strategic Red Sea maritime route did not auger well for peace in the region or for international shipping and investment.  The dispute between Eritrea and Djibouti must not be allowed to fester any longer, he said urging the Council to act with all means at its disposal.
Turning to the situation in Somalia, he said the capital, Mogadishu, was essentially a “war zone” and most of the civilian population had been displaced.  Civilians were also enduring horrendous collateral damage.  African Union peacekeepers had kept the Transitional Government in power, but they were continuously under attack and the need for more troops could not be overemphasized, including the training and equipping of Somali forces.  He urged all well-meaning Somalis, as well as people and Governments of goodwill everywhere, to act to create a lasting and stable environment for the Somali people.
Djibouti was eager that peace and security would be restored in the northern part of the Yemen, within the framework of its territorial integrity, sovereignty and unity.  On the issue of Council reform, he said Africa, the continent with the largest number of countries, needed to have a permanent voice in the conduct of world affairs.  Specifically, Africa must have no fewer than two permanent seats with all the prerogatives and privileges of permanent membership in the Council, including the right of veto;  and five non-permanent seats.  The recent global crises underscored the urgency for Africa’s meaningful involvement in the United Nations and world affairs.