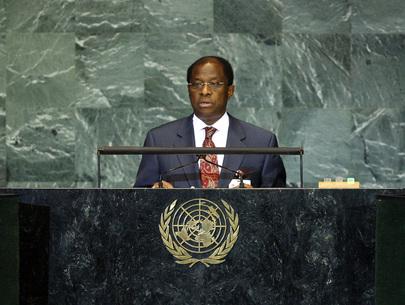 ALEXIS THAMBWE MWAMBA, Minister for Foreign Affairs of the Democratic Republic of the Congo, said that Africa, particularly the central and southern parts of the continent, had made healthy progress in settling conflicts in Burundi and the Central African Republic, promotion of good-neighbourly relations between Chad and the Sudan and, albeit slowly, promotion of democracy and consolidation of peace and stability in Southern Africa.  He supported the mediation efforts by the Southern African Development Community (SADC) in Madagascar and rejected any unilateral decision that would violate the Maputo Agreement.
He said that the global economic crisis had undermined economies worldwide, and his country suffered from a drop in commodity prices, growing cost of imports, declining growth rate and diminishing tax revenues.  The crisis had led to a shortfall of resources to finance infrastructure.  At a time when the country was emerging from conflict, there was a lack of resources to establish State-wide authority.  The Democratic Republic of the Congo was also affected by climate change.  He welcomed the high-level event last week on the issue.  If rising sea levels and advance of deserts, among other consequences, could not be stopped, the world would move towards a disaster and the African continent would be the first to bear the cost.
As for United Nations reform, he reiterated his plea for the full representation of Africa in the decision-making bodies, particularly the Security Council.  Any viable reform must take into account the political and numerical weight of Africa in the Assembly.  Addressing the issue of the responsibility to protect, he said that each State must protect its people against war crimes, crimes against humanity, genocide and ethnic cleansing.  The principal role of the international community consisted in determining how it could support States in that regard, particularly countries in post-conflict situations.
Three years after the successful elections in his country, it was at long last in the process of normalizing democracy, for which the rule of law was an urgent need.  Peace and security could only continue if the population realized it was established through fair means.  Measures against corruption in that regard had begun to bear fruit.  A successful transition from war to peace was not possible without mechanisms that could provide a sense of justice for all citizens.
Sexual violence and rape in the eastern part of the Democratic Republic of the Congo were the most serious crimes humanity had seen in the twenty-first century.  Justice must be restored to the raped women and girls.  The Government was putting an end to impunity for the perpetrators of those crimes, whether they were military or civilian.  Describing actions, in cooperation with Rwanda and Uganda, against the rebels of the Lord’s Resistance Army and the Democratic Liberation Forces of Rwanda (FDLR), he said the authority of the State was being restored and peace was gradually being established.
Like other post-conflict countries, the Democratic Republic of the Congo underscored the urgent need to hold an international conference on financing of reconstruction as soon as possible, he said.  Coming out of a long war, his country was eminently aware of the importance of regional cooperation.  It had learned that the most expensive peace was less onerous than the cheapest war.