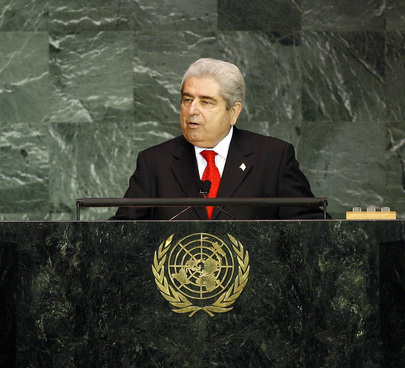 DEMETRIS CHRISTOFIAS, President of Cyprus, said world stability and welfare had been threatened by the recent global economic and financial crisis.  The world could only overcome such challenges, including disease, poverty and threats to the environment, through collective international action and not through economic nationalism.  He said:  “The most important lesson to be learnt from the financial crisis is that the economy cannot be seen in isolation from the needs of society.” The scope of the current turbulence was a manifestation of neo-liberalism and lawlessness in its strongest forms.

In its present negative state, globalization was driven by the pursuit of excessive gains whereby the rich were becoming richer and the poor were becoming poorer, he continued.  More than halfway to attaining the Millennium Development Goals, the financial crisis was forcing States and institutions to rethink global priorities.  The United Nations was the most crucial body to find solutions to the effects of the global financial crisis, he added.

The world was faced with numerous challenges, including climate change, human rights abuses, failure to protect the vulnerable, growing conflict, pandemics, the proliferation of weapons of mass destruction and growing conflict. He cautioned, “If we do not take measures now, we face the risk of extinction.  We must take measures now.  Tomorrow will be too late,” he said, stressing that December’s forthcoming Copenhagen Climate Summit must be a turning point in addressing catastrophic climate changes.

Turning to a military coup and foreign invasion in 1974, he said the United Nations had responded with key resolutions expressing the international community’s support to Cyprus.  Those and other international legal instruments and resolutions gave his country help towards finding political solutions.  He said that, one year ago, his country had embarked on intensive negotiations with the Turkish-Cypriot leader, Mehmet Ali Talat, in a common effort to end the division of the island.  There had been some progress, though he admitted the two sides did not seem to be close to a final solution to the Cyprus question.

His country’s goal was to ensure the sovereignty, independence and unity of the common homeland for Greek-Cypriots and Turkish-Cypriots, and to restore human rights and basic freedoms of all peoples.  Above all, Cyprus was committed to creating a United Federal Republic of Cyprus with two large autonomous regions, one Greek-Cypriot and the other Turkish-Cypriot.

Despite his country’s efforts, Turkish-Cypriots, with Turkey’s support, continued to make proposals outside the framework of United Nations resolutions on Cyprus regarding termination of military occupation, the illegal confiscation of property and the presence of settlers.  Possible acceptance of those proposals would ultimately lead to violation of international human rights treaties, as well as of the basic principles on which federations were built.

Since the 1974 invasion, Turkey had become a key player in finding a solution to the Cyprus problem and successful solutions still relied on its political will and policies.  Contrary to its current confederation-oriented approach, he urged Turkey to contribute towards a dual federation in line with Security Council resolutions.  It should resume normal relations with the Republic of Cyprus and recognize it in accordance with the European Union’s decisions.

He also said it was a paradox that Turkey, a member of the Security Council, did not recognize the Republic of Cyprus, and that it continued to occupy its territories for 35 years, undermining its unity and integrity, thus violating United Nations resolution 541 (1983), which recognized the sovereignty and independence of the Republic.  That was illegal.   Cyprus never sought hostile relations with Turkey, but it had to protect its sovereignty.  It was prepared to resume talks with the Turkish Government and with the Turkish-Cypriot leader.