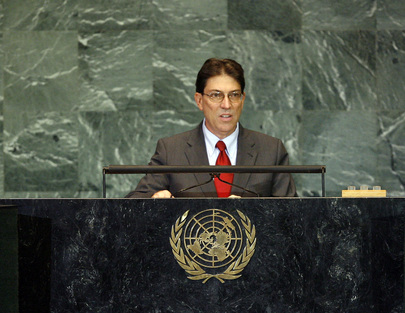 BRUNO RODRÍGUEZ PARRILLA, Minister of Foreign Affairs of Cuba, said the global community had reacted with “profound optimism” to the change of Government in Washington and it appeared that a period of unilateralism in United States foreign policy had ended.  Although the conciliatory speech from the White House had raised great hopes about change, dialogue and cooperation, Washington’s real capacity to “get over” ideological trends that threatened the world under the previous Administration was uncertain, as the neoconservative forces that promoted the use of force and domination still held the reins of influence.  The detention centre in Guantanamo, which had usurped Cuban territory, had not been shut down. Occupation troops in Iraq had not been withdrawn and the war in Afghanistan was expanding.
The new United States Government had announced measures in April to abolish some of the most brutal actions taken by the former George W. Bush Administration, and while that had been a positive step, it was insufficient, he said.  For example, American companies had received authority to carry out telecom operations in Cuba, but restrictions that prevented their implementation had not been modified.  Nor had there been any sign that the Government would end the “immoral practice” of misappropriating Cuban funds that were frozen in United States banks. Despite laws such as the Helms-Burton Act, the United States President had broad powers to modify the implementation of the blockade.
Describing options, he said the United States could allow Cuba to buy products containing more than 10 per cent of American components or technology anywhere, regardless of trademark.  The United States Treasury could stop freezing and confiscating third-country transfers and Washington could lift the ban preventing third-party vessels from entering United States ports until 180 days after touching any Cuban port.  Further, the President could allow American citizens to travel to Cuba.
The indisputable fact was that the United States Government continued to ignore the General Assembly’s overwhelming appeal to end its blockade.  Just two weeks ago, that country’s new President had stated that it was in the United States national interest to maintain sanctions against Cuba.  Recalling that Cuba, for years, had shown its willingness to normalize relations, he said Cuban President Raúl Castro had reiterated the desire to sustain a respectful “arm’s length” dialogue with the United States, without overshadowing his country’s sovereignty.
Among the topics Cuba considered necessary in any future discussions with the United States were:  the lifting of the blockade; Cuba’s exclusion from the list of countries that sponsored terrorism; abolition of the Cuban Adjustment Act; compensation for economic and human damages; return of territory occupied by the Guantanamo Naval Base; end of radio and television “aggression” against Cuba and an end to funding for domestic subversion.  Also, the United States President had the constitutional basis to release the five Cuban anti-terrorism fighters who had been imprisoned in the United States for 11 years.
Describing Cuba’s efforts, he said that, on Cuba’s proposal to cooperate in the fight against drug trafficking, terrorism and human smuggling, his Government had held “fruitful” talks on migration and resumption of direct postal services with the United States.  Cuba maintained “fraternal” cooperation with tens of countries from Africa, Asia, Latin America and the Caribbean.  Even under a blockade, Cuba had shown its ability to cope with the global economic crisis and impacts of climate change, which cost the economy 20 per cent of its gross domestic product (GDP) last year.  Patriotism, social justice and the decision to defend interdependence were part of Cuban national identity.
Regarding regional events, he said Latin America and the Caribbean were living through a dramatic juncture, and the coup d’état in Honduras reflected that fact.  It was not clear why the plane that had kidnapped the legitimate Honduran President Jose Manuel Zelaya had stopped at the United States Air Base at Palmerola.  He should be fully and unconditionally reinstated in the exercise of his constitutional duties and the siege against the Brazilian embassy in Tegucigalpa must end.  Such events coincided with renewed United States interest in establishing military bases in Latin America and reactivation of its Fourth Fleet, which threatened progressive processes, particularly in Venezuela.  Amid such moves, he called for greater contributions from Latin American and Caribbean peoples towards their independence.
As for the global economic crisis, he said forecasts for recovery early next year were not based on solid data and developing countries had been victims of irrational models of industrialized nations’ consumption, exploitation and corruption.  Measures adopted were mere palliatives that perpetuated deficiencies of an unjust economic system and he called for promoting a fully inclusive international dialogue with active developing-country participation.  “We need to establish a new international economic order based on solidarity, justice, equity and sustainable development,” he said, urging the United Nations to play a key role in those efforts.  In closing, he reiterated Cuba’s appreciation for the Assembly’s solidarity in its struggle against aggression and the blockade.