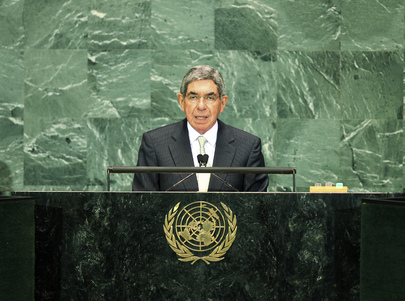 ÓSCAR ARIAS SÁNCHEZ, President of Costa Rica, said that, when he had first spoken at the United Nations 23 years ago, it was as “an island of reason in a sea of insanity”, and he came bearing the cries of millions of Central Americans who sought a peaceful solution to the civil wars that lacerated the region.  The second time he had come, it was to ask for support for a peace plan signed by the Presidents of Central America.  In those days, “no one thought we would have the strength to confront the Powers of the cold war and find our own solution to our problems.  No one thought that we would be able to sow the seed of democracy in our lands.”

Today, he wanted to recognize the distance Central America had travelled, but to also warn of the risk of falling back.  He said one Central American nation had seen the “demons of coup d’état” awaken once again.  The armies of the region received nearly $60 billion to combat “imaginary enemies”, while the people struggled against the economic crisis with empty hands.  He said some leaders defied democratic rules in “imaginative ways”, while problems on the continent remained the same or deteriorated.  Poverty continued to afflict more than a third of its inhabitants, and one in three Latin Americans had not “seen a high school classroom”.  Additionally, the violent death rates of some countries in the region exceeded that of countries at war.  Millions of trees were felled, making up two thirds of the loss of forest cover worldwide.

He said it was difficult for Latin America to not feel it was always rescuing the future from the claws of the past.  The problems of democracy, development and fighting militarism and oppression were cycles that repeated themselves in most developing nations.  These nations also bore the worst part of the struggle against global warming, and would carry the heaviest burden of population growth.  Success would depend on whether three fundamental challenges could be taken on, namely strengthening democracy; promoting development through the reduction of military spending and arms trafficking; and the creation of a new international order for the transfer of aid, information and technology to combat climate change.

In the rush to emulate developed countries, he said developing nations had skipped fundamental steps, including the patient construction of democratic institutions, as they lacked a true civic culture that extended beyond appearances.  Paraphrasing Argentinean writer Jorge Luis Borges, he said most inhabitants of developing countries did not identify with the State, which to them was more like an abstract concept far from their immediate needs.  This was why they preferred messianic leaders to democratic institutions and “caudillos” to political parties.  “As long as we continue on this path, placing hopes in developing countries will be like pouring water into a sack,” he said.  That challenge was even more urgent due to the threat of an arms race that moved $1.3 trillion internationally.  The combination of strong armies and weak democracies had proved harmful in every corner of the planet, above all in Latin America, which had been “a showcase of dictatorial horrors” during the second half of the twentieth century.

In Latin America, armies had not guaranteed respect for political will; they had mocked it, he said.  Latin America spent $165 million a day on weapons and soldiers, despite threats that were less significant than the mosquito that carried malaria, or the drug cartels and street gangs who were sustained by the unrestricted market of small arms and light weapons.  For that reason, priorities must be put in order.  Since Costa Rica had renounced its army and declared peace on the world, it could now invest its resources in things that mattered.  He said it was both a good resource-allocation strategy, and a moral imperative for all nations to gradually reduce military spending.

Furthermore, he asked the General Assembly once again to make the Costa Rica Consensus a reality, an initiative which would create mechanisms to forgive external debt and support with international resources the developing countries that were investing in environmental protection, education, health, housing and sustainable development, and less in arms and soldiers.  He also asked the General Assembly to approve the arms trade treaty, which would prohibit the transfer of arms to States, groups, or individuals when sufficient reason existed that those weapons would be used to weaken human rights or international law.

He said that right now the “greatest arsenal of genius” in the world was working on perfecting weaponry and defence systems.  But that was not its place.  Its place was in creating universally accessible medicines, protecting harvests, educating future leaders and protecting against global warming.  With the upcoming summit in Copenhagen, he said Costa Rica would attend with its “head held high”, since it had launched an initiative called Peace with Nature, through which, among other things, Costa Rica proposed to become carbon neutral by 2021.  That was possible due to nearly four decades spent replanting forests, safeguarding natural species, and the pioneering of institutions devoted to the search for renewable energy sources.  More than 95 per cent of Costa Rica’s electricity currently came from water or wind.

In closing he reiterated that the three main challenges of strengthening democracies, reducing military spending and cooperating to confront climate change constituted the most ambitious agenda humanity had ever taken on.  However, he said the world was like Adam and Eve, in an ideal Paradise, minutes before being expelled “by our own arrogance”.  Whether or not the opportunities were squandered depended on the international community’s sense of responsibility, humility and courage, and he expressed hope that that would be the beginning of a new, sustainable civilization.