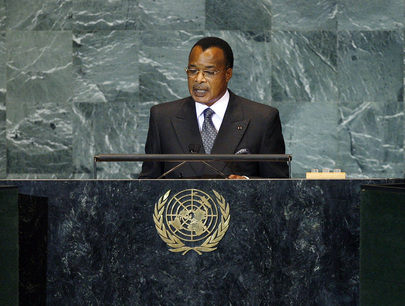 DENIS SASSOU-NGUESSO, President of Congo, said the United Nations symbolized hope in the face of the major challenges that countries could not tackle alone.  The Summit on Climate Change had called upon the collective consciousness of all nations to work together to build a better world for present and future generations –- one that resembling that which the Organization’s founding fathers had hoped for.
He went on to say that everyone knew that nearly 1 billion people around the world lived on a dollar a day.  Everyone also knew that climate change exacerbated that injustice in countries that bore the least responsibility for it.  Indeed, Africa, responsible for only 3.8 per cent of the planet’s greenhouse gas emissions, had suffered the most from the effect of climate change.
Sustainable development was not a concept, but an issue that required responsibility.  Urgent measures were required in Africa -- and all nations -- to guarantee food security, combat drought and restore the natural eco-systems.  That would require mobilization of major resources.  One of Congo’s main resources was the forest, the planet’s most important “lung” -- a vast carbon sink needed to help regulate greenhouse gases -- after the Amazon jungle.  Congo was aware of its role as guardian of that immense and unique ecological system, and had worked with the international community since the 1990s to protect it.
The upcoming Climate Change Conference in Copenhagen must address numerous mechanisms, including adaptation, capacity-reinforcement and technology transfer and financing, he said.  The international community should take into account the forests, which were carbon sinks that could help stabilize the planet.
Turning to the situation in the Middle East, he supported efforts to promote a permanent dialogue between the parties and bring about an equitable end to the crisis.  He called for strict compliance with the nuclear non-proliferation agreements.  The renewed confidence of the Congolese people in his presidency was based on a project called the “Path of the Future”.  It proposed to open the country to modernization and industrialization, pursue peacebuilding and the rule of law, and promote good governance and protect human rights.   Africa would do everything within its power to open up a gateway to the future for everybody.